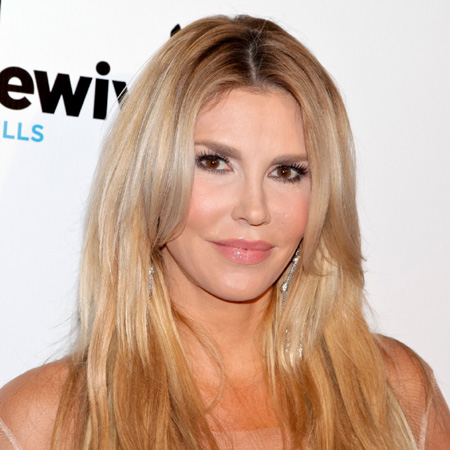 The reality show personality, Brandi Glanville is also an author and model. In 2011, she featured on ‘The Real Housewives of Beverly Hills.’ She then went on to join, Celebrity Big Brother in the year 2017. Besides, she is also a bestselling author as one of her books, 'Drinking and Tweeting: And Other Brandi Blunders', picked to the top 10 of the New York Time's Best Sellers list in 2013.

TV personality, author, and model, Brandi Glanville was born on November 16, 1972, in Salinas, California, US. Regarding her nationality and ethnicity, Brandi is a White American. She was brought up in her hometown, Sacramento, California as the second child of Guy Glanville and Judith.

Her father Guy Glanville used to grow weed. As per Brandi, she used to sell them along with siblings’, younger brother Michael and older sister Tricia.

Brandi has done her schooling from the Sacramento. As a school girl, she also engaged in various education programs.

Before gaining television fame, Brandi Glanville began her career in modeling. When she was 16, she moved to Paris, France and started modeling after Elite Model Management signed Brandi. But she later decided to peruse her career in acting.

Brandi featured in the second season of Bravo’s ‘The Real Housewives of Beverly Hills’ alongside, Taylor Armstrong, Camille Grammer, Kyle Richards, Eileen Davidson, and Lisa Rinna. Moreover, she also participated in the reality show ‘Celebrity Apprentice and finished as the fourth runner-up.

In addition to acting, Brandi is also a best-selling author. She authored "Drinking and Tweeting: And Other Brandi Blunders," which reached the top 10 of the  New York Time's Best Sellers list. She also penned the Drinking and Dating, which was published in the year 2014.

Brandi Glanville, 44, is a divorced woman. Brandi got married to her boyfriend Eddie Cibrian on May 12, 2001. The couple has two children, Mason Edward and Jake Austin. They both are living along with their father, Eddie.

The couple had a smooth running relationship for several years, but Brandi and her ex-husband, Eddie filed for divorce in July 2009 due to Eddie’s extra marital affair. The pair finalized their divorce in September 2010. Following their divorce, the actor, Eddie married to his girlfriend, Leann Rimes in the year 2011.

As a mother, Brandi often visited Los Angeles to watch her son’s soccer game. There she also spent some of her time with Eddie and his present wife, Rimes. Real Housewives of Beverly Hills star, Brandi Glanville exchanged vows with Darin Harvey later on December 30, 2010.

They organized their wedding ceremony in Las Vegas.

The successful actress and author, Brandi garnered a hefty amount of money from her creative career as he has featured some hugely popular TV series and movies. One of her books, Drinking and Tweeting: And Other Brandi Blunders is listed in top ten on the New York Time Best Selling.

The book is available at Amazon with Kindle version for $10.88, Hardcover version for $13.50 and Paperback version for $11.45. The book earned around $538K on its opening week. It is assumed that Brandi’s net worth is more than $2 million. She is 5 feet 10 inches tall.