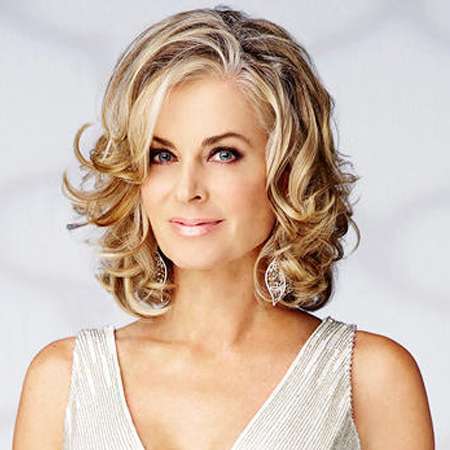 Eileen Davidson, aged 57, is a popular American actress best known for her roles in soap operas as Kristen DiMera in Days of our Lives and Ashley Abbott in The Young and the Restless and The Bold and the Beautiful.

She also won 2014 Daytime Emmy Award for Outstanding Lead Actress in Drama Series from Days of Our Lives. Marie is also an author who has published four books yet.

Davison was born on June 15, 1959, in Artesia, California. She was the youngest daughter out of six children of Richard Davidson and Charlotte Davidson. She was raised in the Catholic community in her hometown. She is an American by nationality and belonging to White American ethnicity.

After graduation, she never joined college but to a rather shady job in California. She started her career as a model appearing in print ads. Her agent suggested she take acting classes to appear in television commercials. Her success leads her to play in various TV series. She made her acting debut in 1982, as a guest-star in TV Series, The Phoenix.

She appeared in several films but her acting career blossomed when she got the role of Ashley Abbott on The Young and the Restless. She was fired in 2007 due to a lack of storyline but immediately got the same role in the sister soap The Bold and the Beautiful at the request of its producers.

She later moved back to Y&R playing the same role. She continued appearing in The Young and The Restless and Days of our Lives until 2014. In the same year, she joined the cast of The Real Housewives of Beverly Hills Season 5.

Davidson was born and raised in Artesia, California as a Gemini. She was born as the youngest child of Charlotte Davidson and Richard Davidson.

Davidson is a married and has a child. Sha has married thrice.

She first married to Christopher Meyer in 1985 but their marriage was a myriad of annoyances, molesting and private and public harassments directly or indirectly in person, by mail, telephone, at either of their respective residences, places of employment or any other place.

They had a very unstable marriage which lasted around 6 months but their divorce took two years to hammer out. In 1997, she married filmstar Jon Lindostrom. The couple could not make their relationship longlasting and divorced in 2000.

While casting for The Young and the Restless she met Vincent Van Patten, a professional tennis player, and son of the famous actor Dick Van Patten. She had an affair with him and after divorcing with Christopher Meyer three years after their marriage, they got married in 2003.

During the affair, Van Patten was also married to Betsy Russell. They welcomed their son Jesse Thomas in the same year, who weighed 8 pounds 4 ounces at birth.She and her current spouse have not been divorced as of date.

It is rumored that Eileen Davidson has had a plastic surgery. Dr. Anthony Youn, a plastic surgeon, guess that her nose may have been dramatically thinned but she has neither confirmed nor denied these allegations. While on The Real Housewives of Beverly Hills, she also revealed that she is a physical abuse survivor.

Being a popular soap opera star as well as a cast of a famous reality show The Real Housewives of Beverly Hills, Eileen Davidson has a net worth of an estimated $3 million.

She had a salary of $50 per day while casting for The House on Sorority Row. She also had a contract of $750000 for her role in The Real Housewives of Beverly Hills Season 5, making her the highest paid actress on the American reality show.

She has been awarded the Daytime Emmy Award for Outstanding Lead Actress in Drama series for her role in Days of our Lives in 2014.