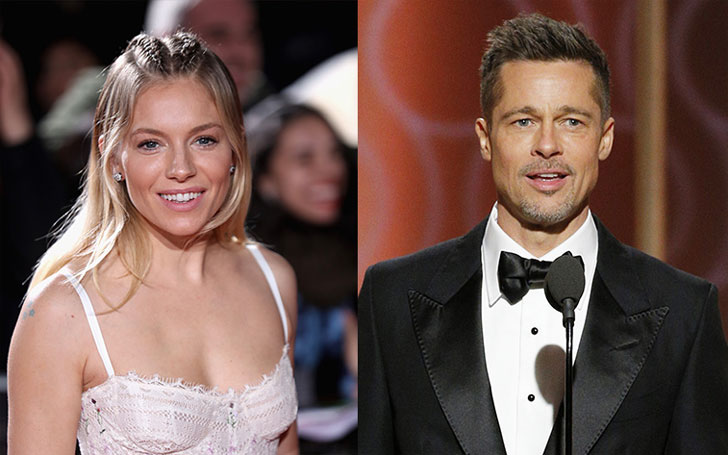 Megastar Brad Pitt has found his new love after seven months of his divorce. Pitt got divorced from his ex-wife Angelina Jolie last September.

Is Pitt over is 12 years old relationship already? Is Sienna Miller Brad Pitt's new love or a rebound? We discuss it all here.

Brad Pitt and Sienna Miller are allegedly dating. This is the first time in seven months of his divorce with Angelina Jolie, Megastar Pitt hit the headlines with a romantic relationship.

53 years old Pitt and the 35 years old actress, Sienna Miller, were reportedly close months ago. Determined to keep their romance under wraps the couple met secretly. However, Dailymail  got ahead of the couple, they reported: "their cover was seemingly blown when they were seen looking very intimate in a Glastonbury VIP area."

Another source revealed that they appeared together in a late night party and were holding hand and stroking each other.The source said:

“Brad and Sienna couldn’t keep their hands off each other, touching and stroking each other at every opportunity. They seemed really intimate".

Two months ago the couple was linked as Miller was cast in Brad’s production, The Lost City of Z. Pitt and Miller appeared flirting after the movie’s premiere at an LA restaurant. But Miller  had refused their romance and said: "It’s predictable and silly."

Brad Pitt and Angelina Jolie were once the most committed couple in Hollywood until Jolie filed divorce against Pitt in September 2016. They were together for about 12 years.

In 2004, Pitt and Jolie fell in love on the sets of Mr. And Mrs. Smith.However, they denied the connection at first as Pitt was married to Jennifer Aniston. Pitt and Aniston divorced later giving way for Brangelina.

Jolie announced her pregnancy in 2006 after Brad divorced Aniston. And in 2006, their first child Shiloh was born. Pitt also said they wouldn't marry each other until "everyone else in the country who wants to be married is legally able'', meaning they support gay marriage.

Brad Pitt and Angelina Jolie with their kids

The couple got engaged in 2012 and married in 2014 in Correns, France. They have six children: Maddox, Pax, Zahara, Shiloh, Knox, and Vivienne. However, they got a divorce in 2016. The couple is still fighting for child custody among other things.