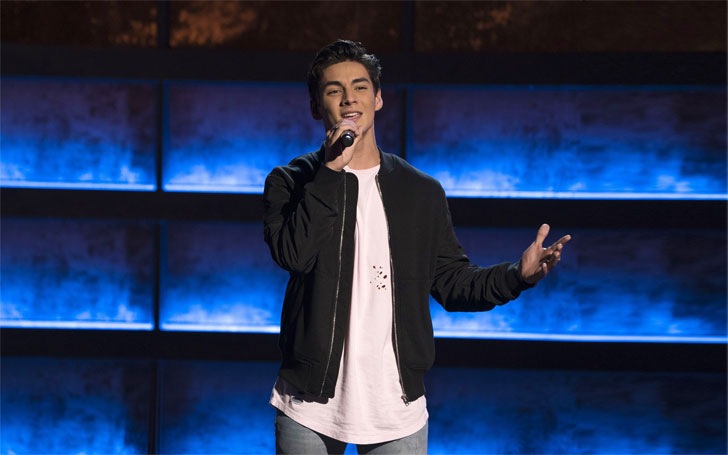 ABC's reality series Boy Band which was premiered on 22 Jun 2017 is winning millions of hearts these days. On the show, many new talented stars battled to gain a position as a member of the next great music sensation. Chance Perez is one of them.

Perez is a talented singer who is also a Youtube star and he scored over 70,000 subscribers on his Youtube channel as of August 2017.  What is his current relationship status? Is he dating anyone? We have all the answers for his curious fans right here.

Who is Chance Perez Dating Currently? Is He single?

Currently, nineteen years old Chance Perez is not dating anyone officially. He is possibly single. However, he has a two years old daughter, Brooklyn Louise, from his previous relationship with Emma Kathleen Smith.

Perez welcomed the little princess, Brooklyn Louise, on 10 July 2015 when he was only 17 together with his then girlfriend, Emma Kathleen Smith. However, they are not together currently, but they share joint custody of Brooklyn. He also believes his daughter is a gift of God and wants to build his career to support and raise his daughter.

The young dad frequently shares pictures of his cute daughter on his social media.He shared a cute picture of his daughter on her 2nd birthday and he expresses his love saying:

"My sweet girl, Brooklyn you are everything in this world to me, and two years ago you made me the happiest man alive by coming into my life. I adore you and cherish you so much."

On his another post, he shared a cute picture where he appeared with his adorable daughter and writes he misses his daughter. He is such a lovely father, isn't he?

He is also a proud father. On his next post on 19 July, he shared a beautiful collection of pictures of himself and his daughter with a message: "Brooklyn makes me the proudest father and I am so blessed to have her."

Perez shares a good relationship with his child mother, Emma Kathleen Smith. They are not together, however, they are close and treat each other as a family. Smith shared a cute family picture where she appeared with her daughter and her daughter's dad on April 2017. She writes: "We will always be family."

In one of the episodes of  Boy Band a few days ago, Perez got emotional when he talked about his past. He burst into tears while talking about his break up.

“When we split I didn’t really let myself feel anything, and I just kind of accepted that it happened, and it took me two months to even try and do anything about it. And by that time it was too late. You know, I just kind of blocked that out."

He also shares his father died when he was only eight. he said:

“And it just made me think of all the things that have happened in my life, like my dad — he passed away when he was eight.”

“It feels good to let out the things that I’ve been bottling to myself, I didn’t even realise.”

Chance Perez has a strong chance of winning the show Boy Band. What do you think?