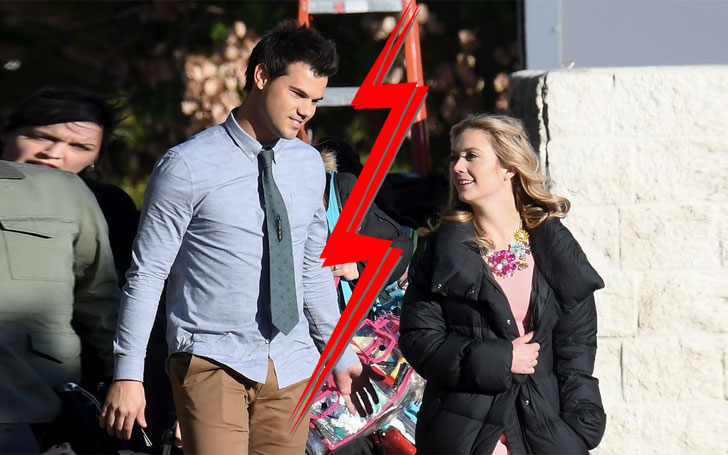 Scream Queen's co-stars Billie Lourd and Taylor Lautner who were romancing each other on-screen as well as off-screen have reportedly broken up. Taylor Lautner supported his girlfriend during her hard time and was by her when her mother and grandmother passed away on January.

Billie Lourd and Taylor Lautner seemed close just a month earlier Lourd's uncle Todd Fisher even praised Lautner for being the best boyfriend. What could have gone wrong in a month?

Billie Lourd and Taylor Lautner are no more a couple, a source close to PEOPLE confirmed on July on Thursday. They reportedly got apart after dating for about eight months.

“They aren’t together anymore but they are still friendly. She’s really focused on her work right now.”

Also read: Who is Taylor Lautner Dating Currently? Know about his Current Affairs and Relationship

The rumor of their separation started after July fourth as Lautner appeared at The h.wood Group’s Bootsy Bellows without his girlfriend. The couple used to be quite active on their Instagram but they have remained silent since late May.

The last time the couple appeared together on social media was on 24 May through Lautner’s Instagram post where he shared a picture of two together under the caption:” Feelin lucky every day..”

Twenty-four years old Lourd also silently confirmed their separation as she removed past pictures of two together from her Instagram.

Billie Lourd and Taylor Lautner Relationship Before the Break-Up

The Scream Queen on-screen couple came to light as a real life couple in December last year after two were spotted kissing at a party.The Twilight star also supported Lourd after her mother Carrie Fisher and grandmother Debbie Reynolds passed away. He was also by Lourd's side when her mother was at a hospital due to heart attack and during the funerals for Fisher and Reynolds in LA on 6 January.

The family that masks together lasts together! Hello 4/3/17 #fresh #relax @praisethelourd

Lautner met his former girlfriend's family in April and the couple also spent time with Lourd's dad Bryan and his husband Bruce Bozzi in St. Barts. In the same month, Lautner and Lourd appeared together in Stagecoach country music festival.