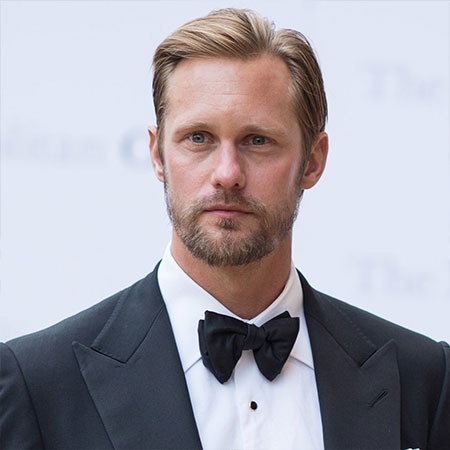 Alexander Skarsgård is a Swedish actor who is best known for his breakthrough performance in True Blood as a vampire, Eric Northman. He won an Emmy Awards for Big Little Lies in the limited series or movies of Outstanding Supporting Actor.

Alexander Skarsgård was born as Alexander Johan Hjalmar Skarsgård on August 25, 1976, in Stockholm, Sweden to  Stellan Skarsgård and  My Sonja Marie Agnes. His father is a well-known Swedish actor and mother is a physician.

He was raised along with his five siblings; Gustaf, Sam, Bill, Eija, and Valter. Also, he has two half-brothers, Ossian and Kolbjörn. He belongs to White ethnicity/race and holds an American nationality.

Alexander began his acting career at the age of seven. He was offered a role of Kalle Nubb in Åke och Hans värld. In 1989, he gained the public attention for his work at Hun den som log and at that time he was just 13.

Nonetheless, he quit acting for nearly seven years and applied to do his national service. He served for 18 months in the Swedish military. In 1996 he left Sweden and joined Leeds Beckett University for next six months to learn English.

In 1997, he attended the Marymount Manhattan College and enrolled in a theater acting which aspires him to pursue his career in acting.

Skarsgård returns on a big screen in 2001 with the film, Zoolander, and later he was cast in Hundtricket-the Movie. Even, he was named the Sexiest Man in the Sweden for five times.

In 2004, he moved to LA. He got his big break in the critically acclaimed HBO miniseries, Generation Kill where he portrays the role of Sergeant Brad "Iceman" Colbert.

Shortly after finishing the Generation Kill he was cast in the novel adopted series, True Blood created by Alan Ball who is the Academy Award-winning screenwriter of American Beauty.

He played the role of Eric Northman, a powerful 100-year-old Viking vampire who runs a local bar and potential love interest of Skokie Stackhouse, female lead. In 2014, True Blood ended its seventh and final season.

Alexander appeared in several series and movies such as; Eastbound & Down, Big Little Lies, The East, The Giver, Hidden, War on Everyone, The Legend of Tarzan and many others.

True Blood fame actor is possibly single. In the past, he was linked up with his True Blood co-star, Evan Rachel Wood but both of them haven't confirmed the rumors yet.

On September 18, 2017, while receiving the Emmy's, Nicole Kidman planted a kiss on him which raised many of the viewer's eyebrows, and many of them tweeted about it too, but later it was referred as unintentional.

Skarsgård is one of the successful Hollywood stars who has gained lots of name and fame in short period of his career. He has given many blockbuster series and movies. His net worth estimated around to be $12 million.