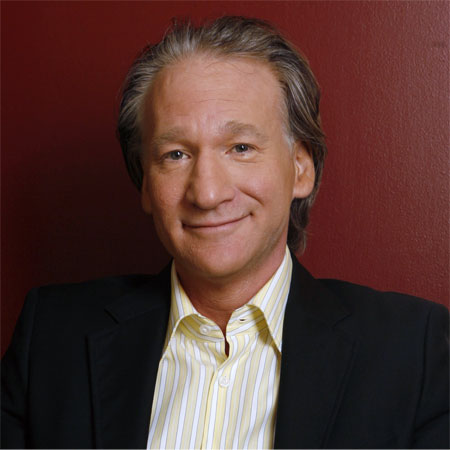 William Maher, popular as Bill Maher is an American political commentator, comedian, and TV host. He is best known for the HBO political talk show Real Time with Bill Maher. Maher ranked at number 38 on Comedy Central's 100 greatest stand-up comedians of all time in 2005. He received a Hollywood Walk of Fame star on September 14, 2010. He is well recognized for his sarcastic attitude, political satire, and sociopolitical commentary. He supports the legalization of cannabis and same-sex marriage. His critical views of religion were the basis for the 2008 doc u mentary film Religulous.

Maher was brought up in an Irish-American family in River Vale. He graduated from the Pascack Hills High School in Montvale in 1994. He majored in history as well as English from Cornell University.

He began his career as an actor/stand-up comedian. Maher was the host of the New York City comedy club ‘Catch a Rising Star’ in 1979.

Bill appeared on a late-night TV talk show ‘Politically Incorrect with Bill Maher’ from 1993 to 1997 on Comedy Central and from 1997 to 2002 on ABC. The show won a number of awards like Emmy Awards in the category of Outstanding Technical Direct, Genesis Award for the Best Television Talk Show, etc.

I should be home writing Trump jokes but the Mets are in town! And the Trump jokes kinda write themselves...

The following year, 2003, Bill Maher became the co-writer, co-producer as well as the host of ‘Real Time with Bill Maher’ on HBO. The show got renewed for its 15th and 16th season by HBO in 2016.

Bill Maher is also a frequent commentator on various cable news networks like HLN, MSNBC, FOX News, and CNN. He frequently appears on CNN’s ‘The Situation Room with Wolf Blitzer’ and MSNBC’s ‘Hardball with Chris Matthews’ and ‘The Rachel Maddow Show’.

As of 2019, Bill Maher’s estimated net worth is $100 million as per celebrity net worth. He earns an annual salary of $10 million from his successful career.

He is also known for his relationship with Playboy Cyber Girl Coco Johnsen, who sued him in 2004 for $9 million as a result of "pain and suffering."

Maher also has a minority stake in the New York Mets Baseball. He purchased the 4% share ownership of the club in 2012 for $20 million. Now, Mets are worth around $2 billion, which means a full 4% stake would be worth $80 million. Billy is often spotted in his black Ferrari California, priced around $231K.

In the year 2005, Maher published a book called New Rules which peaked for the first time on The New York Times Best Seller non-fiction list.

Is Bill Maher Married? Know His Affairs and Relationship

Bill Maher is yet to be married but he has dated many girls. In the late 1980s, he dated Tracy Richman, TV personality.

Bill was known to be with actress Adrienne Barbeau in 1989. However, in the early 1990s, Maher was on and off dating an adult-movie star and a painter named Heather Hunter. During the 1995s he dated a supermodel, actress, and spokesperson Amber Smith.

Bill Maher dated an editor/journalist-politician named Arianna Huffington in 1997. In the same year, he dated Karin Taylor, a model. The following year he dated Brook Lee, a television presenter and Miss USA 1997. From 2000 to 2001 he dated Vanessa Kay, an actress.

Maher was linked with actress/model Aiko Tanaka in 2002. He is also good friends with Ann Coulter, an author, writer, and lawyer. There was a rumor regarding his romantic involvement with her. He was also linked to Bai Ling, actress and screenwriter. Bill officially dated Coco Jonhsen from 2003 to 200. Maher has been linked to many other women over the years and even officially dated them.

He started dating Anjulie Persaud in 2014 and has been seen in beaches and other places with her. Bill Maher is known to be into black women, and about that, He simply says that it’s Robert De Niro who is into black women not him.

The famous American actor, as well as a talk show host, was once sued by his ex-girlfriend for $9 million. The reason for it was alleged to be that, Bill torture her. However, in 2005 the lawsuit was withdrawn.