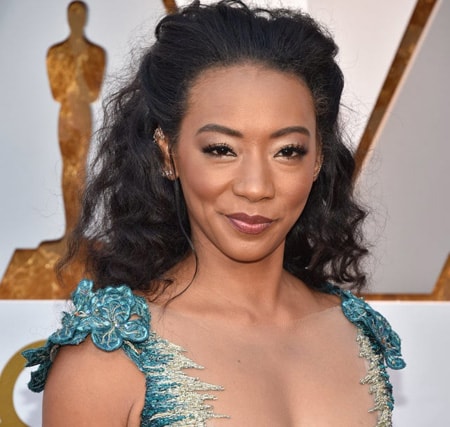 American-born television and film actress Betty Gabriel is famous for her role in the 2017 movie Get Out. She was also one of the contenders for the Academy Award for supporting actress for her role in the movie. Besides, she has also made her appearances in several other movies and television series, especially for Blumhouse Production films.

Early Life-When is Her Birthday?

Actress Betty Gabriel was born in Washington, D.C. She hasn't been open about sharing her birthday, however, some online media says she was born in 1976. Moreover, we came to know from a tweet that Betty Grabriel celebrates her birthday on 14th October. However, she is yet to reveal her birth date publicly.

Gabriel grew up in Pittsburgh, Pennsylvania and Hyattsville, Maryland. Talking about her educational background, she completed BSc in animal science from Iowa State University. Following her graduation, she relocated to Chicago where she studied modern dancing and started working as an actress in the Chicago theater community.

In 2008, she completed her graduation from the Conservatory at Act One. Later in 2009, Gabriel attended The School at Steppenwolf. Likewise, in 2014, she accomplished her graduation with GrDip in drama from Julliard.

In 2011, Gabriel landed her first major role in a drama Memoriam. She worked in numerous television projects including Good Girls Revolt and Westworld. Later, in 2016, Gabriel starred in the main role in the horror sequel, The Purge: Election Year.

Her most popular and critically acclaimed role came in the year 2017 when she worked in a horror thriller Get Out. Her presence in the movie was lesser than that of the lead Daniel Kaluuya, Allison Williams, and Bradley Whitford, however, she was equally credited for the film's success.

She had been filming the sci-fi body horror Upgrade as the female lead when Get Out was released in the USA. Her role in the film gained critical acclamation while many critics believed she would be awarded th Academy Award for the Best Supporting Actress, however, she didn't win the award.

Gabriel's role as Det. Cortez opposite Logan Marshall-Green in the sci-fi action horror Upgrade also gained her massive fame. By far, she has worked in six projects with Blumhouse Production including Get Out and The Purge: Election Year.

In February 2018, Gabriel joined the second season of Counterpart, an American sci-fi film as FBI agent. She shares the screen with actors James Cromwell, Nicholas Pinnock and Sara Serraiocco in the series.

Betty Gabriel has worked in around a dozen movie and television series. Within a short acting career, Gabriel has established herself as a prominent actor of the Hollywood industry. Not only fame, but Gabriel has also earned a huge amount of money from her work.

Even though Gabriel's exact net worth is not revealed, we can assert it to be in millions.

Betty Gabriel is one of those rare celebrities who makes headlines due to their relationship stuff. Moreover, Gabriel has remained taciturn when it comes about sharing her personal life in the media.

Though she hasn't spoken about her marital status or relationships, some reliable sources have reported the actress to be single at the moment. Meanwhile, the actress often shares her picture with a guy named Jon Rich on her social media. Many of her fans and media have speculated him as her boyfriend, however, she has never introduced him as her beau.