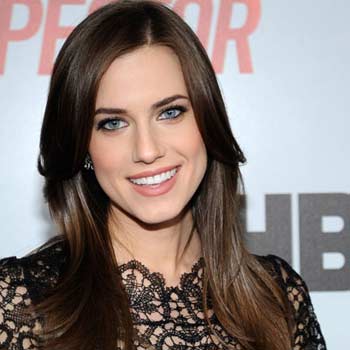 Allison Williams born Allison Howell Williams is an American actress, singer, and comedian best known for her character Marnie Michaels in the HBO comedy series, Girls. Williams debuted in the industry from television and is seen in a lot of TV series up until now. Currently, in 2018, she is a part of Netflix series A Series of Unfortunate Events and a TV miniseries Patrick Melrose. Besides acting, she is also an ambassador in the community-centered program, Horizons National.

Williams was born in New Canaan, Connecticut a town in the states to Brain Williams former anchor and editor of NBC Nightly News and TV producer, Jane Gillan Stoddard on April 13, 1998.  Her star sign is Aries which justifies her passionate character and her ability to lead.

Williams finished her schooling from New Canaan Country School and Greenwich Academy. She then joined Yale University, one of the oldest universities in New Haven, Connecticut. While studying there she was a member of the improvisational comedy group Just Add Water who did comedy in an unplanned and unscripted way. She was also a part of the YouTube series College Musical cast by St. Elmo, a secret society at Yale University.

Williams started her career in the television world after being cast in two episodes of American Dreams. In 2010, she gained immense fame as her mashup song, the theme song for the series Mad Men received tremendous public and media attention. Later on,  Judd Apatow producer of the series Girls was convinced to cast her in the series. Her experience in the Just Add Water improvisational group benefitted her in gaining her role as Marnie Michaels in the series.

Before appearing in Girls she featured in many series including The League, Jake and Amir, and The Mindy Project among others. Her filmography career includes two movies till now Past Forward(2016) and Get Out ( 2017). Williams even wrote some funny or die sketches including Will & Kate: Before Happily Ever After where she portrayed newly wedded Kate Middleton, Duchess of Cambridge.

Currently, she is cast in the 2018 Netflix series, A Series Of Unfortunate Events and a miniseries called Patrick Melrose starring Benedict Cumberbatch as Melrose. She has been nominated for various categories for her role in Girls and movie Get out among which she won an award for "The best cast" for her role in Get Out in 2017.

Williams has an estimated net worth of $2 million. Her major source of income is her acting career and currently working alongside Benedict Cumberbatch in the miniseries Patrick Melrose she takes home a six-figure paycheque.

She and her husband Ricky Van Veen is currently residing in a property in Chelsea, Newyork. Her husband is an internet CEO  and has a net worth of around $25 million. Her dad Brian Williams' estimated net worth is $20 million.

Williams is married to Ricky Van Veen, an American internet CEO and co-founder of a comedy website named College Humor. They began dating from 2011 and married 4 years later on September 19, 2015, in a private ceremony in Saratoga, Wyoming a carbon county in the states. Their wedding was organized by popular actor and filmmaker Tom Hanks.

Williams is currently an ambassador for Horizons National a community-centered program which reduces the gap of opportunity for the children having low income and provides them with high- quality learning experience. She has launched a program called 10 days of giving in which each day a new set of teams will be presented and people can help the children by donating for the respective cause. The campaign helps raise awareness and funds for organizational educational goals. She has even spoken about advocacy, Millenial activism and women in Hollywood in the political journalism company Politico podcast women rule.

Here is a video where Williams speaks about her role in Get Out.