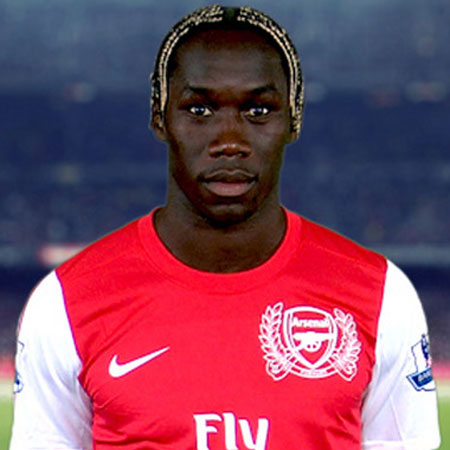 Bacary Sagna is a French professional footballer. Bacary Sagna was born in the year 1983 February 14 at Sens, France. He is 31 years old and has the height of 176 cm and Weight of 72 Kg. He is a Senegalese descent. He is Muslim by faith. He is a married man. Ludivine Kadri Sagna is the name of his Spouse. They got married in the year 2010. He has two children with his wife. He is in social network Twitter via which he used to communicate with his fans. In 2011, he became an ambassador for Grassroot Soccer which is an international non-profit organization which uses the power of football to educate, inspire and mobilize communities to stop the spread of HIV.

Bacary Sagna is a talented and versatile player who plays from the main position of Defense-Right back. He also plays from the secondary positions of centre back and left back. He has very strong skill in aerial duels. He has very strong passing skills. He is good at marking as well. He has a strong grip on the ball. He has good dribbling capability. He has a good positioning awareness. He is adventurous and determined player. He likes to play in short passes. He does not have good skills in tackles so does not dive into tackles. His crossings and shootings are comparatively weaker than his other skills. He has been described as the best right back in the Premier League by Arsenal’s manager Arsene Wenger. He is called Bac by the majority of his teammates. He has made the image of reliable and consistent figure in the club.

Bacary Sagna started his youth career from the native club Sens. In 1998, he joined in Auxerre for football training. In 2002, he was promoted to the second division of Auxerre called Auxerre B. From the same team, he made his professional debut in the year 2002. He spent two seasons with Auxerre B appearing in 37 matches bagging 3 goal scores. Later in 2004, he was promoted to the first team of Auxerre. He appeared in 89 matches from the team. In 2007, he made his move to Arsenal. He is in the Current Team of Arsenal as a Defender wearing jersey No.3 since 2007.

Bacary Sagna is in the National Football Team of France since 2004. He used to play from under-21 Team of the National Team till two seasons. Bacary Sagna is promoted in the first team of France National Team since 2007. He has played in the 39 cap matches so far. According to the Salary statistical record of 2012, his Salary is reported to be 3.12 million Pounds. He is one of the dependable defenders in the team whose current market value is 10.56 million pounds. Groupe USM is the name of his agent.