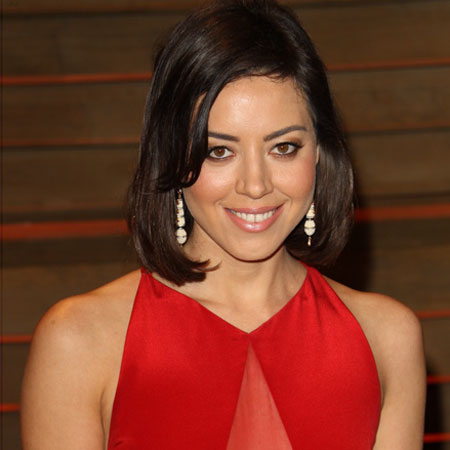 Aubrey Plaza is an American comedian actress, well recognized for her appearance as April Ludgate on the NBC sitcom Parks and Recreation. The actress likewise landed a role in the hit movie Safety Not Guaranteed and her subsequent successful project are Life After Beth and Mike and Dave Need Wedding Dates.

Aubrey Plaza was born in Wilmington, Delaware, on 26 June 1984, to her parents Bernadette who is an attorney and David Plaza, a financial advisor. Plaza also has two younger sisters named Renee Plaza and Natalie Plaza.

Her name was named after the song called Aubrey. As her father is Puerto Rican and mother is Irish-English, Plaza was raised Roman Catholic. She has a mixed ethnicity of Puerto, Irish and English and holds American nationality.

Aubrey Plaza studied in an all-girls Catholic school from 4th to 12th grade. Later in 2002, she graduated from Ursuline Academy and also from New York University's Tisch School of arts in the year 2006.

During high school, Plaza was a student council president. Plaza has once suffered a stroke that caused her temporary paralysis and expressive aphasia when she was at NYU in 2004.

Plaza's career began as an intern, some of them including an internship for Samba Post-Its. She worked as a director's assistant to a writer, producer, and director Bennett Davlin.

Plaza has also performed improv and sketch comedy at the Upright Citizen Brigade Theater in the year 2004. She has also appeared as a stand-up comedian in the Laugh Factory and The Improv. She has Portrayed as Seth Rogen's love interest Daisy in 2009's series named Funny People.

Aubrey Plaza performed at " A Night of 140 Tweets: A Celebrity Tweetathonf to Haiti", and in 2011 she appeared on Portlandia, in which she appeared as a guest judge during a roast segment on The Next Food Network Star 2011.

In the year 2012, She showed up in Father John Misty's music video for the song named "Hollywood Forever Cemetry Sings". Moreover, in 2014, Plaza was in Cassorla's "Bona Fide" video where she played saxophone for the first time professionally.

In 2016, we can hear her voice in a commercial for Apple iPhone 6s and she has also appeared as a guest star on Harmon Request which is an animated pathfinder show.

Aubrey Plaza has from her several roles in both movies and TV series collected a large amount of money. Her estimated net worth as per celebrity net worth is $6 million, in 2019.

The actress has been part of a number of box office hit movies and highly rated TV series. One of her commercially successful movies was Mike and Dave Need Weeding Dates which made a whopping box office collection of over $77 million. In the movie, she played the role along with
Zac Efron, Anna Kendrick, and Adam DeVine.

Aubrey Plaza is unmarried yet. However, she has dated some men in her life. She first dated an actor named Michael Cera for about 18 months. The couple met on the set of Scott Pilgrim vs. The world. Aubrey said that they almost got married in 2010 in Vegas, but could not last longer than a year and a half.

Plaza has been dating her boyfriend Jeff Baena is a director and writer since 2011. Since then the couple is seen staying and working together mostly. As of now thay have already completed eight years of togetherness and still going strong without any bad rumors.