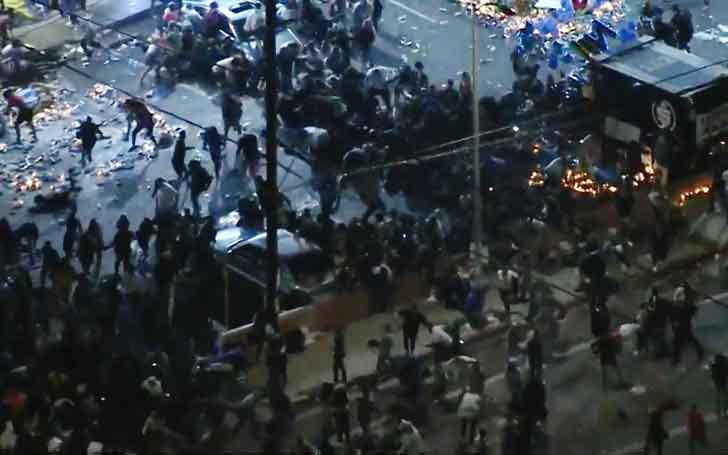 One man stabbed and 19 other injured after chaos broke out at a memorial for rapper Nipsey Hussle organized by his mourning fans outside the LA store where he was shot to death earlier that day.

Hundreds of Hussle's fans gathered outside the Marathon Clothing store in South Los Angeles neighborhood on Monday night to mourn the death of their beloved artist when the disturbances occurred. 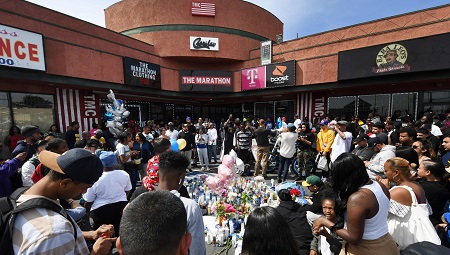 Meanwhile, dramatic footage showed the moment a stampede broke out as terrified fans fled across the parking lot where the vigil was being held.

Two among the crowd were critically injured where one injury was reportedly from stabbing and from a car hitting. Several other people sustained 'trample' injuries while the crowd ran away.

CNN reported rocks and bottles were thrown at officers while they tried to clear the area. At least one person was taken under custody by the police for disorderly conduct.

Meanwhile, recent updates on the rapper Hussle's death has revealed the suspect's name as Eric Holder.  The LAPD announced Holder, 29 is wanted for homicide. In a statement released by LAPD, they said the suspect walked up to Nipsey and two other men while they were standing outside a business in a strip mall.

The statement further reported Holder fired multiple times and then fled in a vehicle driven by an unidentified woman--was waiting for him.

Eric Holder is wanted for Homicide in the shooting of Nipsey Hussle. He was last seen in a 2016 white 4 door Chevy Cruze CA license plate 7RJD742. Anyone with information related to his whereabouts or this deadly shooting is urged to contact South Bureau Homicide at 323-786-5100 pic.twitter.com/3pX4fbezDs

Police requested anyone with the information related to the homicide and the suspect to contact South Bureau Homicide at 323-786-5100.