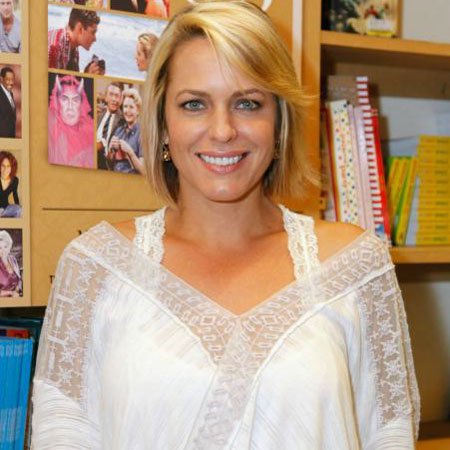 Three times Emmy award nominated, Arianne Bethene Zuckerman is an American actress and model. She is the household name on the television screen for her outstanding performance in the NBC sitcom Days of Our Lives as Nicole Walker. Started her modeling career after being discovered by a scout from It Models, her career took her to locations around the world, including France, Japan, Australia and New York.

She was married to actor Kyle Lowder in 2002. The couple divorced in March 2014. They separated briefly in August 2007, then reconciled in March 2008. They have one child.

Arianne Zucker was born on June 3, 1974, in Northridge, California to a lab technician mother Barbara Zucker and a plumber by occupation, father Barry Zucker. She has an American nationality and belongs to white ethnicity.

Arianne Zucker was raised in Chatsworth along with her brother Todd. Both the siblings went to Chatsworth High School. She was a cheerleader during her years at the school. Arianne Zucker is a graduate of Los Angeles Pierce College.

Arianne Zucker was discovered by a scout from It Models at the age of sixteen and it was when Arianne Zucker stepped into the world of modeling. She has traveled around the world including Japan, Australia, France and New York to walk the ramp.

During this time, Arianne Zucker booked a number of national as well international commercials including Mazda and McDonald’s.

Arianne Zucker started her film career with a short film called Looking for Bobby D and then later she got a role in CSI: Miami as Brenda Collette in 2002. Then she appeared in Life in General, The Contractor, and The Assistant.

Arianne Zucker marked her fame in television screen as Nicole Walker on Days of our Lives along with Diedre Hall, Nadia Bjorlin from 1998 to date. In the midst, Arianne took a break from the sitcom and been back since 2008.

Arianne is the character in Days of Our Lives who interacted with Donald Trump on the Show and later on, the comments they made to each other went viral ranking the show and her fame. However, recently in March, she announced her departure from the Days.

She has worked as a model and has starred in commercials from popular brands such as McDonald's and Mazda. She has worked in movies such as Looking for Bobby D, The Last Resort, and The Contractor.

Arianne Zucker was not initially planning to be on the cast of Days of Our Lives. She had thought of being a veterinarian if she had not been acting. Therefore she, along with her brother Todd, opened a non-profit organization named Arrow-Heart Adventure Camps.

Besides, Arianne also served as an ambassador for Habitat for Humanity in California. She helped to build and raise fund for the families affected by Hurricane Katrina in New Orleans working closely with the St. Bernard Project co-founder Zack Rosenburg.

Moreover, Arianne Zucker is a part of the Step Up Women’s Network and is associated with several other organizations including Miss World, Global Citizens, and many others.

Arianne Zucker has a beautiful personality and a beautiful heart. She loves animals and was planning to be a veterinarian. She is a green belt in taekwondo as well.

Moving onto her relationship status, she is currently dating her co-star from Days of our lives Shawn Christian. They have been together in thick and thin since 2014.

Prior to this relationship, Arianne Zucker has a broken engagement and is once divorced. Arianne was reported to be dating with an actor Michael Dietz in 1997. The couple had romanced for two years and was engaged before splitting in 1999.

Afterward, Arianne Zucker started having an affair with her Days of our Lives co-star, Kyle Lowder. They started dating the same year, Zucker called off her engagement. After two years of romance, they decided to get married and exchanged their marital vows on 3 August 2002.

The blissful marital life took a low-turn in their lives as Arianne and Kyle separated for the first time in 2007. It is rumored that the separation was because of the decision of having a child while Kyle was not ready for it.

After seven months of their separation, the couple reconciled and welcomed their beautiful daughter named Isabella Resse Lowder on 7 December 2009. However, the reconciliation could not last as a lifetime commitment, resulting in divorce in 2014.

A source reports the divorce is because of having the different values and heightening their career in their own way. Arianne Zucker also agrees that they don’t have any issues or misunderstanding.

They still see each other while taking their daughter out and also her boyfriend Shawn makes a margarita for him when he comes to visit his daughter Isabella at her house. She is happy for having her life in working condition.