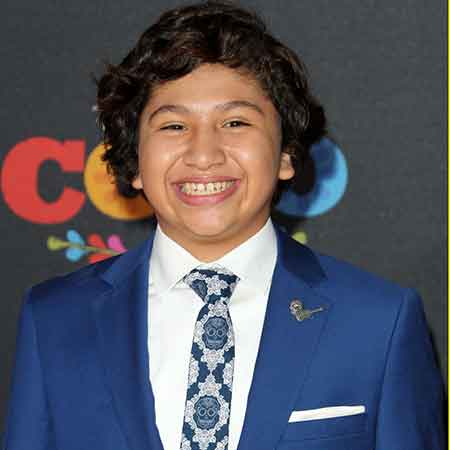 Anthony Gonzalez is one of the aspiring actors of the Hollywood who is famously known for giving his voice to the lead character, Miguel in the 3D computer-animated fantasy film, Coco. The movie was a big hit and even won Academy Award for Best Animated Feature. Similarly, for his role, he also won several awards including the Washington D.C. Area Film Critics Association and Annie Award. Besides, he also appeared in the television series such as The Bridge and Criminal Minds: Beyond Borders,

Anthony Gonzalez was born to Lilian Gonzalez on 23rd September 2005 in Los Angeles, California, the United States under the birth sign Libra. His parents raised him with his three siblings, two sisters and an elder brother.

Gonzalez has a big and diverse family and is very close to them.

''My family is very diverse. I have a big family from many places.''

His parents raised him on a farm in Guatemala and later emigrated to Los Angeles. His family members are from Puerto Rico, Germany, Italy, and Mexico. Regarding his academics, he is studying at Colburn School.

Anthony Gonzalez started singing from the early age of 4 with his family in the historic La Placita Olvera district in LA. He got inspired by his siblings, he said,

Later, Gonzalez was discovered by Blanca Valdez, a casting director. In 2014, he made his movie debut as a young boy in an episode of the FX's crime drama TV series, The Bridge starring Diane Kruger, and Emily Rios.

In 2017, Gonzalez worked in an episode of CBS' police procedural series, Criminal Minds: Beyond Borders with Gary Sinise, Alana de la Graza, and Daniel Henney. The same year, he made his breakthrough with his debut movie, Coco by Lee Unkrich.

He was overwhelmed after he learned about the role. He said,

''I never thought I’d be working in a Disney-Pixar film at my age. I grew up watching these films! Being there at this age is a wonderful, very beautiful experience.''

''I think Coco came at the perfect time to show everyone to stay together and live the importance of family, that families should be united.''

The young actor rose to fame after the appearance which helped him to win several awards like the Washington D.C. Area Film Critics Association and Annie Awards.

I feel so blessed to have been honored with the "Breakout Young Entertainer of the Year Award!" Thank you so much @yeaawards and to everyone who made this possible!!! I had an AMAZING time with family and friends! Love you all!!! #yeaawards #youngentertainer #youngentertainerawards #thankful #family #friends #blessed

As of 2018, he is working on Icebox and The Gospel Truth.

Anthony Gonzalez has an estimated net worth of thousand dollars, but, the amount is yet to be official. The actor has many upcoming projects from which we can see a rise in his net worth and income. His major source of income is his acting career.

According to several online sources, a TV star made an average salary that ranges from $150k to $1 million. The emerging actor has worked in many box office hit movies like Coco which grossed a huge box office collection racking up over $807 million worldwide against its $175 million budget. There is no doubt that he received considerable payment from the movie.

The talented and aspiring actor, Anthony Gonzalez is very young to be involved in a relationship. He is more focused on his career and is working hard to establish himself as one of the top actors.

Gonzalez relates very much to his voice-character Miguel from Coco as he also had a dream of pursuing a career in music. Just like his character admires Bratt's character, singer Ernesto de la Cruz, he also admires his idols Pedro Infante, Vicente Fernandez, and Jorge Negrete.

THANK YOU ALL SO MUCH for your infinite SUPPORT!!! I had an amazing time performing at the Historic Olvera Street and seeing you all there!!! Love you all!!! #olverastreet #pixarcoco #love #familyperformance #inspiringfuturegenerations #givingbacktoourcommunity #family

A post shared by Anthony Gonzalez (@anthonygonzalez_official) on Feb 4, 2018 at 4:27pm PST

''[Miguel and I] both have a passion for music, and we both know how important our family is. We know the importance of remembering our ancestors.''

But there is only one difference between his life and his character and that is his family has always supported his career. He told,

''I’m just so thankful for my parents because I wouldn’t be here if it weren’t for them, and I’m thankful to God for giving me, such wonderful parents.''

The actor along with his family also celebrates the Day of the Dead. He celebrated it since he was 6 when his grandfather passed away.

Check out the interview with Anthony Gonzalez: