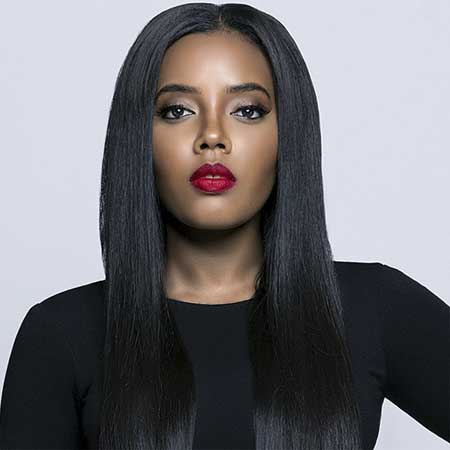 Angela Simmons is an American reality star and a businessperson. She got recognition on television after appearing on the hit reality TV series, Run's House. She is the daughter of hip-hop legend, Rev. Run.

Simmons was born on September 18, 1987, in Queens, New York, U.S. She holds an American nationality belonging to the Afro-American ethnicity. She is the daughter of Joseph Simmons (her father) and Valerie Vaughn (her mother).

Simmons has a sister named Vanessa Simmons and a brother named Joseph "Jojo" Simmons Jr. Her father, Joseph is one of the founding members of the influential group called Run-D.M.C. and is popular by his stage name, Rev. Run and DJ Run.

Simmons attended Fashion Institute of Technology for a year before dropping his college to be a businessperson.

Simmons started her career working in an American reality television series called Run's House which also stars her family members. The series first aired on October 13, 2005, and is based on the family life of former Run–D.M.C. rapper and hip-hop music pioneer Joseph Simmons, also known as Rev. Run.

Simmons has also featured in the music video, "Shortie Like Mine" by Bow Wow. Besides, the actress also launched Pastry Footwear with her elder sister, Vanessa under their family's line of footwear named Run Athletics on March 23, 2007. The first product line "Cake Collection" was inspired by her favorite pastries.

Simmons made her solo designing debut with her faux fur line called Foofi and Bella in 2015. She worked as an executive producer on the reality television program, Growing Up Hip Hop in 2016. She has also starred in that series alongside Romeo Miller and other cast members including TJ Mizell, Kristinia DeBarge, Boogie Dash and Egypt Criss.

Simmons, age 29, is not married yet but has a son. She has three step-siblings from her father's another marriage. Her father got married to Justine Jones (Simmons) on June 25, 1994, after divorcing his first wife. They together had three children, Daniel "Diggy" Simmons III, Russell "Russy" Simmons II, and Victoria Anne Simmons.

Simmons is currently engaged to her boyfriend, Sutton Joseph Tennyson and has a baby boy who was in September 2016. The couple started dating a few years ago and had an affair for several years before being engaged. She currently resides with her fiancé and son in Los Angeles.

Simmons is enjoying her life being a good mother as well as a perfect partner. There is a greater chance for this lovely couple to get married shortly, as they have a good understanding with each other.

Simmons has posted several pictures with her son on her Instagram account. Most of her posts on social networking sites and the pics clearly reflects her love for her child and her boyfriend.

Simmons harvests good income from her work, as the co-owner of Pastry Footwear. As of 2017, Her estimated net worth is around $7.5 million. Apart from this, the actress has an amazing body and stands 1.6 meters (5 feet 4 inches) tall and weighs 127 pounds.

Simmons is active on social networking sites like Instagram and Twitter. She has a huge number of fan followers on both of her social accounts and she keeps her fans updated about her activities through her posts.