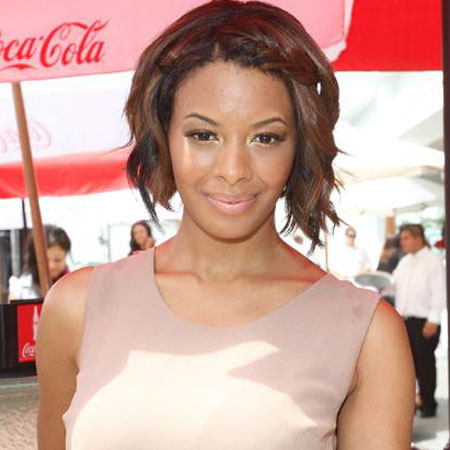 Vanessa Simmons was born on August 5, 1983, as Vanessa Jean Simmons. She was born in the United States of America. She is the daughter of Valerie Vaughn and Joseph Simmons. Simmons was raised in her Native town along with her six other siblings. She is the niece of the co-founder of Def Jam Records, Danny Simmons, and Russell Simmons.

Vanessa Simmons’s nationality is American and her ethnicity is Afro-American. She is the eldest among her siblings and she has three brother and three sisters. And they are Angela Simmons, Diggy Simmons, Russell Simmons II, Miley Justine Simmons, Victoria Anne Simmons and Joseph "JoJo" Simmons Jr. She attended St John's University.

Vanessa Simmons gained popularity after being in the family's MTV reality show Run's House in 2005. Later she got a chance to be featured in television show Guiding Light in 2007. In 2009, Simmons appeared in American reality television series Daddy’s Girls. She was also featured in American reality show Cupcake Wars in 2012. Vanessa Simmons other major appearance in television series includes The Meredith Vieira Show, Project Runway, Steve Harvey and Project Runway: Threads.

Vanessa Simmons made her debut on the movie screen from the 2010 movie Speed-Dating. Later in 2012, she got a chance to prove her acting talents in a science fiction, dance battle movie Boogie Town. The Same year she was featured in American drama-comedy film Dysfunctional Friends.

Besides the movies, she has been featured in several television series including Worst. Prom. Ever, From This Day Forward, What Would You Do For Love and others. Simmons has been working very hard in her career and has achieved much to higher level.

Vanessa Simmons’s sexual orientation is straight and she is currently in the relationship with her boyfriend Michael Wayans, who is also a son of actor Damon Wayans. The couples have been in the relationship for several years .Simmons gave birth to their daughter on February 13, 2014.

Simmons is not married yet she might be looking for perfect time to get married as she has already got the fantastic guy who she could make her an idle husband. Simmons and her sister work as designers for the shoe brand Pastry. Simmons currently lives in Los Angeles, California, United States.

Vanessa Simmons has a net worth of $8 million. She is paid a good amount for her appearances in the movies and television series. Simmons is 5 feet and 7 inches tall and has a perfect body.

Being a reality star Vanessa Simmons has been followed hugely by her fans on Instagram and Twitter. Simmons’s biography is updated in Wikipedia with early life, career, and personal life details and has her details on many other sites.