Angela Amezcua and Clay Harbor have called it off!!!

The Bachelor Nation pair has broken up from their romantic dating relationship after being together for more than seven months. The news got confirmed by several sources.

The 31 years old, Clay Harbor who starred on the season 14 of The Bachelorette made his relationship public with the Bachelor in Paradise season 5 star in September 2018 after sharing a picture of the couple on Instagram. 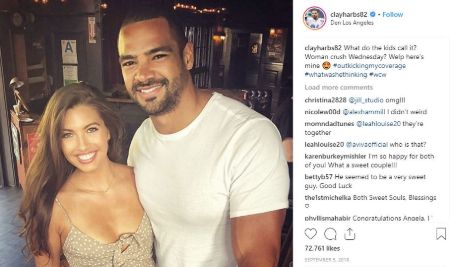 He has captioned the picture writing,

What do the kids call it? Woman crush Wednesday? Well here’s mine

Angela Amezcua who appeared on The Bachelor in 2017, was previously romantically linked to Eric Bigger.

Angela Amezcua and Clay Harbor's relationship was set up by Angela's BIP season 5 costar Chris Randone after she showed her interest in a football player.

Their relationship got aired after Angela Amezcua hinted that they will be moving together on October 1 episode saying,

I’m still in South Carolina, but before Paradise, I was maybe gonna move to Nashville, and that’s still kind of the plan. But I don’t know. We’re talking, there’s been some things that we’re talking about. … It’s great because our schedules are super flexible right now, so it’s kind of like anything is a possibility at this point.

But now, the couple has called it off!!!

Their fans speculated they split up in March after they stopped posting pictures together on their social media platform.