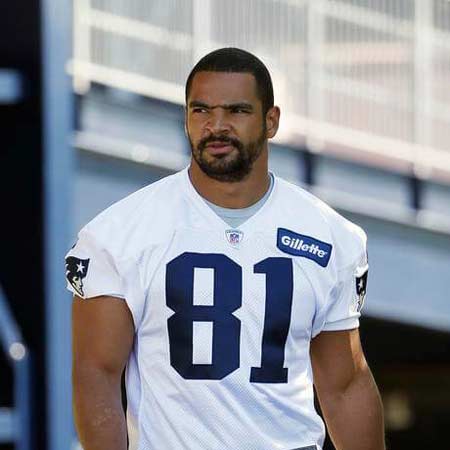 American football tight end, Clay Harbor is currently playing for New Orleans Saints. Harbor is playing for the team since 2017 as a free agent.

He was drafted in the fourth round of the 2010 NFL Draft by Philadelphia Eagles. He has played for several clubs including Jacksonville Jaguars, New England Patriots, and Detroit Lions. In 2018, Harbor participated in the reality show The Bachelorette 14.

Clay Harbor was born Clayton Lee Harbor on 2nd July 1987 in Libertyville, Illinois under the birth sign Caner. Harbor’s parents Jeff Harbor and Donna Norman raised him with his sister, Cameron Harbor and a brother Cory Harbor in Dwight, Illinois.

Harbor attended Dwight High School where he was a four-year letterman in football, basketball, and track. He then earned All-Interstate 8 Conference honors in each sport in his final three seasons. Regarding the football, he broke the school record with 60 receptions, 1079 yards, and 19 touchdowns while playing as wide receiver and safety.

Clay Harbor was redshirted during his freshman year at Missouri State. The next year, Harbor played 11 games performing two of the eleven at wide receiver. In 2006, he caught six pa s ses for 73 yards. The match against Southwest Baptist University was counted as one of his best games where he recorded 3 receptions for 34 yards with a touchdown.

Playing as a junior, Harbor led the team with the record of 40 receptions and 457 yards. After the season, he earned the second-team Associated Press All-America honors. During his junior career, he earned Missouri State University Coors Player of the Week twice. At the same time, he broke 1000 career receiving yard mark and then received first-term All-MVGC honors for the second straight year.

Harbor as a senior, he recorded 59 receptions which became the second-most in the nation with 729 yards.

Harbor signed a contract with the professional American football team, Philadelphia Eagles for the 2010 NFL Draft for $2.243 with the $453k guarantee. In 2010, he recorded nine receptions for 72 yards with one touchdown for the team. On 31st August 2013, he was released from the team.

On 1st September 2013, Harbor was claimed off waivers by American professional football team, Jacksonville Jaguars. At the end of 2013 season, he appeared in 16 games catching 24 pa s ses for 292 yards with two touchdowns.

On 30th March 2016, Harbor signed a contract with the team New England Patriot and released on 3rd October. Harbor then joined the Detroit Lions on 4th October 2016.

After releasing from Lions, he joined the New Orleans Saint on 14th May 2017. Four months later, he was placed on injured reserve.

Harbor participated in the reality show, The Bachelorette season 14 which premiered on 28th May 2018. The show featured reality TV star Becca Kufrin as an eligible Bachelorette. He along with other contestants of the show are fighting to win the heart of Kufrin.

In June 2018, he broke his wrist playing football on a group date during episode three of the dating competition, was forced to leave the show to undergo surgery. In an interview, he said that it was tough for him to leave the show.  Then, it has not revealed that he will return in the spin-off show Bachelor in Paradise in August.

Clay Harbor has an estimated net worth of million dollars. Harbor made $8.2 million while engaging in his football career as per Over the Clay.

With such impressive net worth, Harbor is maintaining a lavish lifestyle.

Clay Harbor is private when it comes to his personal life. Harbor rarely speaks about his dating life and relationship in public. As per some online sources, he was in a relationship with a lady in the past but has not revealed anything.

And I thought NFL Sunday’s were competitive..

Scrolling his Instagram account, Harbor mostly shares pictures promoting his work. Besides, he is close to his family and shares a strong bond with them.

Here are the interesting facts about Clay Harbor, you must know.