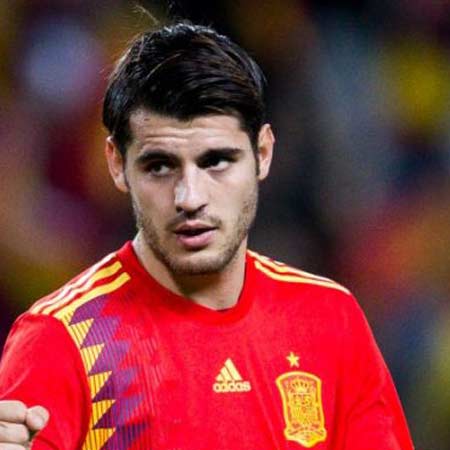 Born in the footballing city of Madrid, Alvaro Morata showcased the quality of a top class player from the beginning of his career. He was back to back European Under 19 and Under 21's top scorer and was considered young prodigy of Madrid's youth system. He is an intelligent striker who can play on either side of the wing. He has great first touch and has a really good link-up play with his teammates. However, during his time at Madrid, he could not get sufficient game time to prove his worth. He then moved to English capital in West London. His first season at Chelsea got mix reviews as he played an incredible first half of season and a bad second half of season after he suffered an injury mid-campaign. But still learning, still adapting English football he is sure to get more goals next season.

While still in B team he made his debut for the first team on 12th December 2010 in a 3-1 win against Real Zaragoza.  Morata scored his first goal for Real Madrid senior team in a match against Levante UD in a 2-1 win.  On 8th March 2014, Morata scored his first Champions League goal in a 3-1 win over Schalke.  He also featured in final minutes in Real Madrid's Champions League win over Atletico Madrid.

On 19th July 2014, he was transferred to Italian giants Juventus FC for a fee of $23 million with a buy-back clause.  He made his debut on 13th September 2014  in a 2-0 win against Udinese Calcio. Two weeks later he scored his first goal for Juventus in a 3-0 win against Atlanta BC.  In 2015 Champions League run of Juventus, he scored some vital goals including two against his former club Real Madrid. He spent two seasons at Juventus and scored 27 goals in 93 appearances.

On 21 June 2016 Real Madrid triggered buy-back clause of Alvaro Morata and brought back Morata to Madrid from Turin. He remained one year at Real Madrid appearing 43 times in all competitions and scored 20 goals. Morata was willing to stay at Real Madrid but due to lack of game time, he transferred to Chelsea FC.

On 19th July 2017, Morata transferred to Chelsea FC in a club record fee of  $79 million. He made his debut on 2017 community shield against Arsenal in a penalty shootout defeat. He made his league debut in the first match of 2017/18 season against Burnley. He came as a substitute and scored one and assisted one in a 3-2 defeat.  He scored his first hat-trick for Chelsea in a 4-0 win against Stoke City.

He also scored a crucial goal against Manchester United in a 1-0 win. He had an impressive form at the start of the season, However, after injury, he could not make as much of an impact in the team. He finished the season with 15 goals in 48 appearances.

In 2018 FIFA World Cup qualifiers he helped Spain to defeat Italy in a 3-0 win.  However due to poor club form and recent injuries he is not included in Spain's 23 man squad for FIFA Worldcup 2018 Russia.

Alvaro Morata became the Chelsea FC's club's record signing with $79 million when he arrived from Real Madrid. He receives a salary of $159,879 per week from Chelsea FC.

During his time at Madrid, he used to earn $105,000 as a weekly wage. His estimated net worth is about $15 million. With the earnings, he has collected a number of brand cars including Mercedes, Jeep Cherokee, Range Rover and Bentley GT.  He is also endorsed by Adidas. Alvaro Morata as per May 2018 is living in an apartment in London and has not yet bought a house.

Alvaro Morata is married to stunning model Alice Campello. The pair were engaged in 10th December 2016 and married on 17th June 2017 in one of the most beautiful cities of the world Venice, Italy. To make their relationship more romantic Alvaro Morata proposed to her during a magic show held in Spain. The couple have a healthy relationship.

During his time at Juventus, he once took the sunglasses of opposing Inter fan and wore it as a gesture of his goal celebration. This was one of the coolest and controversial celebrations of that year.

Alvaro Morata considers former Spanish player Fernando Morientes as his childhood idol. He also has an elder sister named Martra Abril who is a model. She regularly supports his brother and attends several matches.