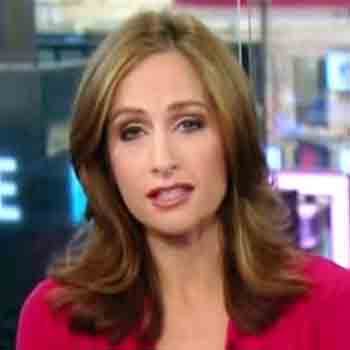 Alison Kosik is one of the prominent faces in the field of media. American media personality Kosik currently serves as a business correspondent for CNN covering the New York Stock Exchange. She joined the network in 2008. She previously worked for several renowned networks like  KZTV-TV, KRIS-TV,  WPEC-TV/WFLX-TV, and WCBS-TVs as well.

Kosik married her husband Adam Huckett and the two are also blessed with one child.

Alison Kosik was born on April 28 in 1971, in Miami, Florida, United States. She is the daughter of Brenda Kosik and Gilbert Kosik. She belongs to American nationality and ethnicity wise, she is a White-American. She was raised up in Miami along with her parents.

Kosik attended Nova High School for her schooling. And following her high school, she went on to study at The American University and graduated with a B.A. in Broadcast Journalism and Political Science. She also attended Columbia University and from where she also received a Scripps Howard New Media Fellowship in the year 2001.

Alison Kosik kick-started her journalism career in Corpus Christi, Texas landing the job as a reporter for KZTA-TV and KRIS-TV. She then started working as a reporter and fill-in anchor for WPEC-TV/WFLX-TV after she moved to West Palm Beach, Florida.

Kosik later went to Washington D.C. and landed her first job as a business correspondent for EnergyNewsLive.com covering the energy sector and energy policy. She also worked as a reporter and anchor for the Sinclair Broadcast Group.

Kosik later began working at Hearst-Argyle Television as a reporter. She likewise served as an investigative reporter at WCBS-TV. The veteran media personality currently serves as a business correspondent for CNN and covers the New York Stock Exchange as well.

Talking about her achievements, Cabrera has been appreciated by her employers and viewers for her dedication and hard work. She was honored with the Florida AP Award for Best Spot News. She also received a 1993 Fellow from the International Radio and Television Society.

Kosik is among one the journalists who got the opportunity to take the interview famous personalities like the Virgin Group's CEO Josh Bayliss as well as President Barack Obama. Apart from it, she has covered some of the important news working with CNN. Some of them are issues of Killing Spree at Connecticut Factory. She is the one to cover President Barack Obama’s stimulus Plan of 2009 too.

Kosik currently serves as a business correspondent for CNN who covers the New York Stock Exchange. There she also worked with several popular media personalities like Brooke Baldwin, Alisyn Camerota, and Ana Cabrera.

Alison Kosik's Net Worth And Salary

From her prolific career, Alison Kosik has earned a decent amount of money. But the exact amount of her net worth is still under review which as per some online sources is believed to be more than $1 million.

Kosik works at CNN where her annual salary is more than $95,690 CNN, as she is an experienced staff of the agency. Her major source of income is also her journalism career. She also worked for WCBC-TV as an investigative reporter where she was also paid a good salary.

Alison Kosik has been married thrice. She married her longtime boyfriend Adam Huckett in 2008. Her husband Adam is a banker in New York. Talking about children, they have a daughter together named Daisy Mae Huckett.

They are happily married and the family of three is living together in New York. She is a very private person. Therefore, she prefers to keep secret her personal life away from the spotlight. Despite her busy schedule, she manages time for her family. She spends her leisure time with her family.

It's been over a decade that the couple is sharing the same marriage journey with no rumors of divorce.

Before meeting Huckett, she was married twice to two different women. She first married an anonymous man from Woodbury. Due to personal differences, the couple divorced from each other. She then married another anonymous guy.

But, their marriage also could not last hence they divorced. Some online sources claim that her second husband is American guitarist Pat Bergeson.

But, the fact is Bergeson’s ex-wife's name is Alisson Krauss. These sources claim this because she and his ex-wife's first name is similar. Later in 2008, she married Adam Huckett. It is her third marriage.

Kosik is an avid animal lover who has a cat named Biggie Smalls and often posts photos of her cat on her Instagram account. She is a foodie person. She especially loves fish and fish items. She loves pop music and is a great fan of Billy Ray Cyrus.

Kosik is busy on social media like Instagram and Facebook. She is a close friend of her colleague Chris Cuomo. She posted a picture of the duo on her Instagram and wrote a congratulation message for him in May 2018 when he began his own show at 9 pm on CNN.

Kosik also shares her daughter's adorable pictures on her Instagram. The family of three visit different places during their vacation and holidays.