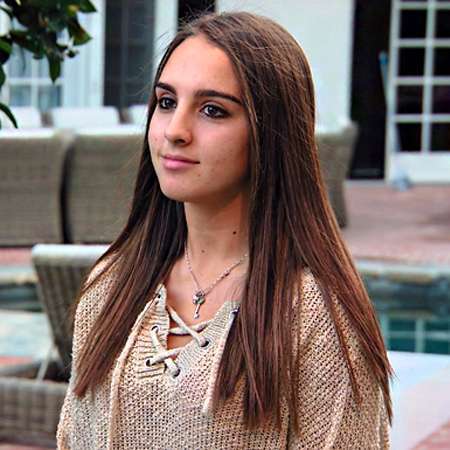 Alexia Umansky is the daughter of a Mexican real estate developer, Mauricio Umansky, and reality star Kyle Richards. Besides, she also gained further praise for her appearance on Bravo's The Real Housewives of Beverly Hills.

Alexia Umansky was born on June 18, 1996, in Los Angeles, California, the United States to mother Kyle Richards and father Mauricio Umansky. Her mother Kyle Egan Richards is an American actress, reality TV star, memoirist and also a philanthropist. Regarding her ethnicity, Umansky is mixed and belongs to American nationality.

Her father, Mauricio Umansky is a real estate agent. Umansky has spent most of her life living lavishly with her 2 siblings Sophia Umansky and Portia Umansky.

Alexia attended the Milken Community School from 2008 to 2014. She then decided to join the University of Arizona for her further studies.

Alexia appeared in the television when her mother signed up for The Real Housewives of Beverly Hills. Before becoming a reality TV star, her mother was an actress who played minor roles in a few movies and series.

She came into the limelight after living in Beverly Hills with her husband Mauricio. Alexis was born six months later. Her mother then signed a contract with Bravo to appear in the first season for the Real Housewives of Beverly Hills in October 2010.

Alexia, along with her family was seen in the reality television show. She still appears in the series along with her mother Kyle, aunts Kim Richards and Kathy Hilton as well as her siblings.

Alexia Umansky's Net Worth And Salary

Alexia  Umansky is expected to be around $1 million at present. She is living a lavish life. She has not started working yet and might not have such a high net worth in her life, as her parents are well-known personalities. She is the daughter of Mauricio Umansky and Kylie Richards.

Her mother Kylie Richards has the net worth of $50 million. Her salary per season of The Real Housewives is $270,000.

The reality TV star also has 138k followers on her Instagram. She often shares romantic phots with boys but yet to introduce anyone as her boyfriend. Probably, she is single at present.

Alexia was recently attacked by her Aunt Kim’s dog named Kingsley. Alexia even had to leave college for her treatment. It was later reported that Kim Richards blamed Alexia for the dog bite. Alexia’s mother is let down by her sister Kim while dealing with the matter.

This also created a lot of controversy in the already chaotic environment of the reality show. The recovery is reported to have gone worse according to various sources. Alexia went home with her family in Los Angeles in order to recover from the injury.

She may even have to lose an entire year of college due to the spiteful dog bite which could have easily got her amputated. She later went for physical therapy and reconstructive surgery.  She is currently living in Bel Air, in Beverly Hills with her parents.