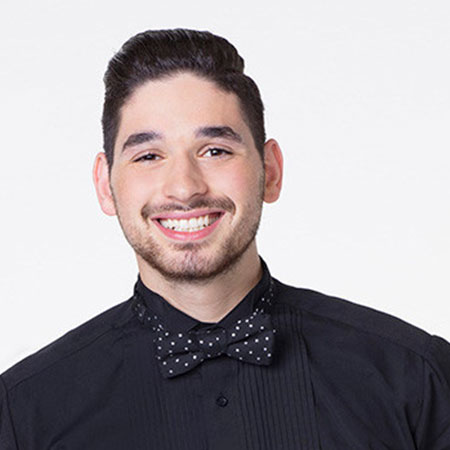 Alan Bersten is an American dancer who made his pro debut on the 25th season of Dancing with the Stars in 2017. Alan Bersten has been a cast member of DWTS since 2016. He started dancing from his early age and by 2019, he is an acclaimed dancer who has even won "Youth Championship" and "Under 21 National Title."

Alan Bersten was born on May 26, 1994, in Minnesota, the USA under the zodiac sign of Gemini. He holds an American nationality and is of mixed ethnicity. He belongs to the Russian-American descent. Alan's father's name is Alex Bersten and his mother is Raisa Bersten.

Alan has an elder brother Gene Bersten and a sister Dr. Melani Bersten. Alan started dancing in his early age of 7 when his brother Gene became his dance tutor.

He attended Hopkins High School and after graduation from there, he joined the University of Minnesota.

Alan Bersten is a very popular dancer skillful in Broadway, hip-hop, contemporary, Bollywood and jazz. Alan's was a talented dancer from his childhood which led him to win Youth Championship and Under 21 National Titles.

When Alan was at the age of 18, he became a finalist on season 10 of So You Think You Can Dance and finished in the Top 6 males. On that show, he performed a memorable blindfolded contemporary piece and became the first participant to perform the style on the show. Alan got to perform through North America with So You Think You Can Dance, and later, he joined Burn the Floor for their world tour.

After the world tour, he received an offer for a recurring role as part of the show choir, Vocal Adrenaline, on season six of Glee. Then Alan started working for the ABC's Dancing with the Stars as a dancing pro. He appeared in the dance reality show for five seasons.

During season 24 of the ABC series, he was partnered with celebrity dancer Heather Morris after her choreographer Maksim Chmerkovskiy got injured. He partnered with Morris for four weeks on the show.

Alan Bersten's net worth has not been revealed yet but as a professional dancer, he earns a decent amount of money. According to the sources, the DWTS cast member earns about $125,000 initially and the winner will receive about $360,000.

Alan has been cast member of DWTS since 2016, and he is acc u mulating some lucrative amount of payrolls for his job on the ABC series.

As of 2019, Alan Bersten is single and does not have any girlfriend. He seems to be busy building up his career as a Professional dancer. Alan was partnered with American mixed martial artist Paige VanZant on Dance With the Stars during mid-2016. After the show, Bersten was rumored to be dating Vanzant but the couple didn't respond to the rumor and it faded away with times.

According to a source, the duo was partnered during the show which sparked the rumor that the couple interested in each other during their rehearsals. After Paige's partner Mark Ballas was injured during the twenty-second season of DWTS, Alan stepped up for his replacement.

After the semi-finals of the show in August 2017, they were rumored to be broken up, however, the couple didn't address the rumor ever. Before, Alan was speculated to be in a relationship with the former DWTS contestant Hayley Erbert.

On Valentines Day 2014, Bersten shared a snapshot of him with Haley and wrote in the caption that he was lucky to be with her. But it was not confirmed whether they were dating or not at that time.

I’m so excited to announce the first ever @dwtsjuniors champions!!!! @skybrown and @jt_church you did it! Every week you believed in me and trusted me and showed me how incredible you both are. And I always believed in you! Congrats to all of the finalists. But I’m just so proud of you Sky!! I love you. We are family forever now! No one really knows how much these 2 put into this, except for me! And every single day you guys made me smile with your hard work and dedication!!! You deserve this and I’m so happy I got to go on this incredible journey with you! You both mean so much to me!

In the video shown below, we can see Alexis & Alan's talking about their relationship.