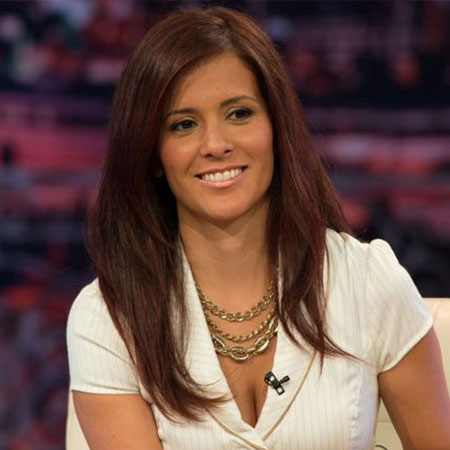 Reporting may not be the fanciest job on the planet but when you are as talented as Adriana Monsalve it is sure to get you fame and fortune.

Adding to her reporting chops she is also a well-known Latin singer and TV host. She was the lead singer in the bands like "Chikas," "Tartara", and "Latin Fiesta".

Adriana Monsalve was born on the 27th of July 1977 in Caracas, Venezuela. She was born under the zodiac sign of Leo which defines her as a warm, action-oriented personality as well as driven by the desire to be loved and admired.

Although she has been in the media for quite some time, she has not revealed any information regarding her family.  She is of Hispanic ethnicity and is Venezuelan by nationality. She attended her local school and graduated with a bachelor's degree in Communications and Advertising.

Monsalve started her career in the music industry as a lead singer of bands like Chikas and Tartara". These bands majorly created Spanish songs and Monsalve soon garnered attention as a singer. She also sang for the "Latin Fiesta" band in London, England.

Later, she hosted the TV morning show Aló RCTV in Caracas but she left the job and moved to the United States in 2002.  When she arrived in the USA, she took jobs in theatre productions and advertisements. Notably, she played Esther at the Tampa Bay Performing Arts Centre.

Latin spokesperson of Rooms to Go

After this, she was appointed as the Latin spokesperson for the furniture company Rooms to Go. Due to her talents and bilingualism, she was noticed by Orlando’s Telemundo, an American-Spanish television network.

She was hired by them for the 6:00 pm newscast as a sports anchor. Similarly, ESPN hired her in 2007 as the Sports Anchor in their ESPN Deportes broadcasting department.

The broadcast was primarily meant for Spanish-speaking viewers in North America and in South America. She left ESPN on November 28 in 2014 to join the Univision Deportes.

Likewise, she left Univision Deportes in 2018 and joined Televisa Deportes. During her short career in media, she has notably worked alongside football superstar David Villa as well.

Monsalve is a well-reputed reporter who has established herself as one of the best Spanish-speaking sports reporters across the world, but she has kept the details about her income, salary, and net worth.

Looking at her fame and dedication to her work, we can speculate that she earns a good sum of money from her career.

Also, we all are familiar with the fact that a sports anchor at ESPN also gets well paid, so we can predict Adriana Monsalve also made $500k.

Adriana Monsalve is a happily married woman as of January 2019. She has 3 children with her husband who has been behind the media radar. She regularly posts pictures with her husband and her children on Instagram but has kept their names private except for her son Matias Gabriel

In December 2018, she celebrated the 10th birthday of her son Matias. She, along with her whole family cut a cake and enjoyed his birthday together. Other than this, the details about her past relationship and affairs are not known to the media.

Height: She has a height of 5 feet 4 inches which is the same as the average woman.

Below is a video of Monsalve covering the news in her native Spanish language along with her co-host.