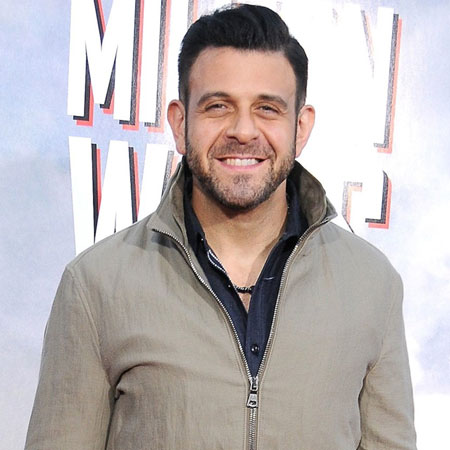 Adam Richman is a versatile American actor and television personality, well recognized for hosting various dining and eating-challenge programs on the Travel Channel. He is best known for his appearance on Travel Channel's Man v Food. Richman retired from competitive eating in January 2012; thus, Man v. Food Nation was the final season of Man v. Food.

Adam Richman was born on 16 May 1974 in Brooklyn, New York City, United States of America. Richman grew up in the Sheepshead Bay neighborhood of the borough. He is white in ethnicity and holds an American nationality.

Richman finished his undergraduate degree in International Studies at Emory University, earning a master's degree from the Yale School of Drama. Richman was a member of Alpha Epsilon Pi fraternity.

Adam's acting career includes his guest roles on Guiding Light, Law & Order, All My Children. He then made his appearances in several TV shows.

In 2004, Adam portrayed the role as a butcher on Joan of ArcadiaI, alongside Amber Tamblyn, Chris Marquette, Will i Am, and others. Additionally, Adam has made his appearance in regional theatre productions throughout the United States, and he has also bee in television commercials several times.

Being a self-educated food expert and trained sushi chef, Adam has maintained a travel journal which includes every restaurant that he has visited since 1995. He maintained his health while he was indulged in his show on Travel Channel's Man v. Food.

At the time of his competitive eater, Adam gained a considerable amount of weight and became depressed. He was a paid spokesman for Zantac during season 3 of Man v. Food.

Moreover, Adam is also the author of America the Edible: A Hungry from Sea to Dining Sea, which was released on 9 November 2010, by Rodale Publishing.

On 23rd Jan 2011, Adam made his appearance on Food Network's Iron Chef America as a judge for a battle with Gruyere cheese as the theme ingredient. Richman also hosted Travel Channel's, The Traveler's Guide to Life, which debuted on 26 January 2011.

In June 2014, Adam found himself embroiled in a social media controversy over comments he made regarding his weight loss, which was complained by a hashtag said to be linked to eating disorders.

The controversial nature of the encounter are allegations that Richman referred to one or more of his followers as haters and further advised them to a gram a razor blade and draw a bath. Later, Adam apologized, but Travel Channel postponed his series, Man Finds Food.

In 2015, Richman told The Independent that he eats a vegan diet when training for soccer. Adam also worked as a judge on the British television series, BBQ Champ in 2015, which was hosted by Myleene Klass and was aired on ITV.

Adam Richman's net worth is $10 million at present. He has earned a decent amount of money as an actor and television personality. He earns $35 thousand per episode working on Man vs Food.

He has also appeared in several national television commercials, as well as playing the role of God the butcher in the 2004 film Joan of Arcadia.

Adam Richman is currently single and has not married yet. However, there are few rumors regarding his love affairs.

In Adam's recent Instagram post on 1st May 2017, he shared a picture of his get-together with American Journalist, Tamron Hall. Because of his post, many of his fans were confused if the two were dating each other.

Adam was also rumored to be in a relationship with British pop singer, Myleene Klass in 2015 when they both performed as judges for the 2015 BBQ camp show. Later in an interview, Myleene confirmed that they were not in a relationship.