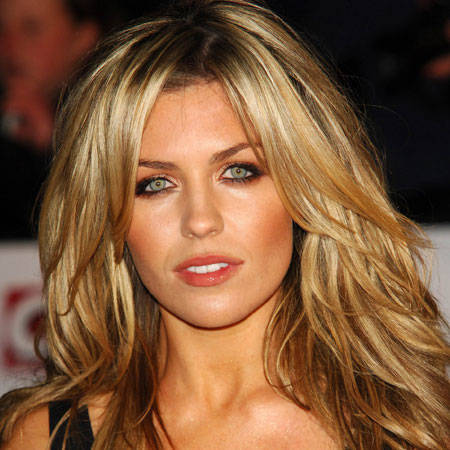 Abigail Clancy is a sexy lingerie and catwalk model recognized worldwide for her beauty and expertise in her field. Sister of footballer Sean Clancy and wife of footballer Peter Crouch, this supermodel is also a television presenter and is the 2013 winner of Strictly Come Dancing. Her other brother John works on the indie band The Razz and is the lead singer and rhythm guitarist for the band.

Born on 10th January 1986, to Karen and Geoffrey Thomas Clancy in Liverpool, Abigail Marie “Abbey” Clancy was a former member and founder of a girl band Genie Queen which was managed by Andy McCluskey and Orchestral Maneuvers in the Dark (OMD).

Abigail’s modeling career started with her participation in 2006, in the second cycle of Living TV’s Britain’s Next Top Model. As one of the thirteen finalists of the competition, she along with the others competed for over 10 weeks for a modeling contract. Though she lost the title to fellow contestant Lianna Fowler, her career in modeling got a kick start due to the exposure this competition gave her.

Abigail started getting modeling offers since her appearance in the show and has since modeled for various newspaper and magazines. She has modeled for Triumph Bonneville Motorbike in the Daily Mail newspaper and has also graced the front cover of the Arena Magazine. As for the 2010 swimsuit edition, she was featured in the Sports Illustrated magazine owing to her connection to footballer Peter Crouch. She wore body paint only, that depicted the England shirt, and was highly talked about and acclaimed for her sexy look. Clancy also modeled in an England shirt in the 2010 campaign for Umbro sportswear, along with other girlfriends and wives of footballers from the World Cup winning countries. She also walked in the Giles Deacon Ready to wear line Giles Spring 2011 collection.

Abigail has also appeared on the March 2011 on the Elite Model Management: New York Division Website and as a part of the London designer, Hasan Hejazi’s campaign, a fashion editorial by Absynth Photographic, and also a fashion film by Gabriel Gettman. She also appeared on the Esquire magazine, in August 2011, in the cover photo, by photographer Solve Sundsbo. Clancy was featured next in the Love magazine’s Advent Calendar.

Apart from her modeling career, Abigail has also made an impact as a reality TV Star and a host and television presenter. Her television career started when she appeared as the talking head in doc u mentaries like Slave to Fashion and The Ultimate bikini Guide for Channel 4. This sexy beauty has also guest starred in the programs like Richard and Judy, the Chris Moyles Show, Friday Night with Jonathan Ross, GMTV, and This Morning etc. Her own reality show Abbey and Janice: Beauty and the Best, started airing from 14th May to 18th June 2007 on Living TV. She has also appeared as a contestant in Hell’s Kitchen, and was the third contestant to the voted out by the public and the 5th to leave the show.  Clancy was featured and won the Chris Movies Quiz Night on 10th May 2009, alongside Patsy Kensit and became the winner of the series.

She has also gone on to co host the ITV2 series, the Fashion show, along with Michelle de Swarte and George Lamb and was a judge in episode eight of the Britain’s Next Top model, being the first ex contestant to be on the judging panel of the show. She laso appeared on the spisode of Blind Date on 22nd December 2009 and was also featured in the ITV2’s The parent Trip, with her mother Karen.

Clancy won the eleventh series of Strictly Come Dancing with her partner Burn the Floor dancer, Alijaz Skorjanec. She has also been ranked the 37th in FHM magazine’s annual 100 sexiest women in 2007, and 55th in 2008. As of 2009, she was placed in the 12th place and in the 10th place in 2012. She started working as a beauty columnist writer for The Sun Newspaper from July 2012, but became the subject of criticism in her home town of Liverpool.

Apart from her career, she is renowned for being the wife of footballer Sean who plays for A.F.C Telford United. He was also a cast member of the E4 reality short lived series Desperate Scousewives. Clancy had an on off affair with boyfriend Peter Crouch after they met in 2006. After dating for almost four years, Clancy was pregnant with their first child around 2010. The baby girl, Sophia was born on 14th March 2011. They got married on 30th June 2011 and the wedding took place on Stapleford Park Hotel in Leicestershire.

Despite being a mother, and handling both her career and her life as a mother, Abigail manages to look like the supermodel she is pretty easily. She has a height of 5 feet 9 inches and a weight of 57 kg which she maintains pretty well. This blonde has a celebrity husband, and she herself is a successful career woman with a net worth of 5 million dollars. Abbey is very much followed and her photos in sexy dress and lingerie are equally famous due to her celebrity status and the same case will be surely continued for some more years to come.