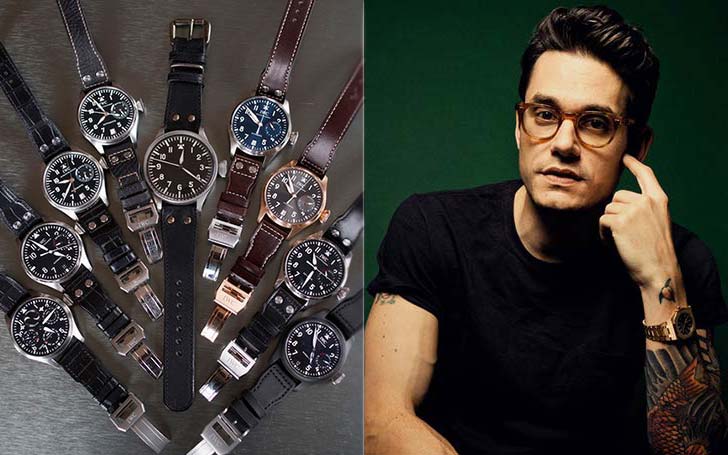 Of all the celebrities out there, John Mayer may be the most popular among watch enthusiasts. The reason is that he doesn’t wear timepieces for status. When you hear him talk about horology, you notice right away that Mayer truly loves the hobby of collecting and the art that goes into creating watches. Even better, he has an incredibly exciting collection, complete with everything from iced out Daytona’s to highly useful tool watches. Below, I talk a bit more about Mayer’s passion and go through some of his favorite timepieces.

His Love for Watches

As I said above, John Mayer is not your average celebrity watch collector. Most of his peers purchase expensive timepieces as status symbols and fun little toys to wear at awards shows. If you ask them a question that takes in-depth knowledge of horology, though, almost none of them would be able to answer it. Mayer goes against the grain by being a true watch geek. He knows his history, he understands what makes some timepieces special, and he explains his collection with glowing pride. If you ever get the chance to hear him talk, you’ll come to the same conclusion.

His Approach to Collecting

Mayer’s approach to collecting is unique. While most of us purchase different models from a variety of brands, he seems to focus in on specific models that he absolutely loves. Then, he buys five or ten versions of them. That includes different colors, eras, and more. What we see as a result is a collection that is incredibly heavy in just a few types of timepieces. The following passages detail four that caught my eye.

The first timepiece that Mayer adores is the Rolex Daytona. By my count, he has 11 versions of this watch. Some are iced out, some are vintage, and some are practically one of a kind. He seems to really enjoy Daytona’s that don’t look like your average product. That is evidenced by two strange dial designs and one that has a pulsation dial. The latter was likely a custom order from a doctor, as pulsation doesn’t typically come on any Daytona.

Another category worth note is his iced-out Daytona’s. While many will find these to be too flashy to wear, they’re also unquestionably beautiful. The rainbow diamond dial on ref. 116598 is especially eye-catching and alluring. Ultimately, given the amount of Daytona’s in Mayer’s collection, it is clear that this is one of his favorite watches. He also has a couple of Submariners to round out the selection.

The second watch that Mayer seems to be enamored with is the IWC Big Pilot. This timepiece is an absolute classic, is well built, and derives beauty from its simplicity. In many ways, it is the opposite of his iced-out Daytona’s. The Big Pilot isn’t going to catch anyone’s eye on their first glance.

That being said, it is a fantastic watch. I might call it the most iconic aviation piece of all time, perhaps only second to the Breitling Navitimer. Clearly, Mayer agrees, given that he owns around 10 of these as well. They include new models, old ones, and special editions that you won’t find on many wrists.

Massive brands like Patek Philippe rarely do custom orders. Of course, for John Mayer, they decided to make an exception. What he ended up with is the Ref. 5004G, which is similar to existing models they make, but with a few differences. They include a salmon dial, luminescent hands, and an engraving on the case back. It also incorporates the day, date, month, and moon phase.

While not as extensive as his Big Pilot and Daytona collections, Mayer also owns a few Royal Oaks from Audemars Piguet. Some of them are more typical looking models, while others have unique concepts. Incorporating a tourbillon and being made with an exceptional level of craftsmanship are what brings all of these AP watches together. My personal favorite is likely the ultra-thin, gold model. Despite it being an incredibly expensive piece, it is also playful and lends itself to being worn on a summer day.

It’s often interesting to learn about a celebrity’s personal life. Many of us know John Mayer the solo artist with a fantastic voice, but we are now learning about John Mayer the watch collector. Every one of us in the timepiece world benefits from seeing this eclectic collection and hearing him talk glowingly about each piece in it. If you’re in the shopping mood, I will be the first to tell you that Mayer has excellent taste. So, if you want to get yourself an iced out watch or a gorgeous Big Pilot, following his lead is a smart strategy.