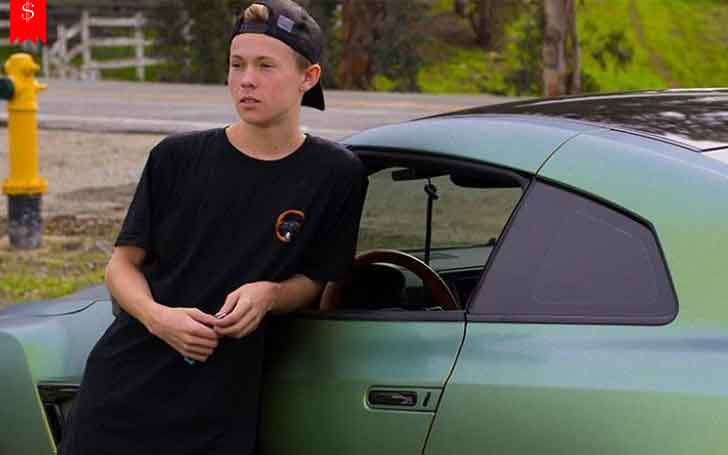 Tanner Fox is an 18-year-old social media star and stunt rider. His popularity is increasing at an incredible rate and this is also increasing his net worth and income over the past few years.

He has cashed in from his online fame with numerous endeavors and by the end of 2018 he will possibly join the millionaire club before reaching 20. But, exactly how much net worth has he accumulated and how does he make his money and wealth? Find out here!!

The internet celebrity, stunt rider and YouTube star Tanner Fox earns a hefty amount from his YouTube channel. He uploads videos on a regular basis and usually garners anywhere from 500,000 to 3 million views in each video.

He also receives a good sum from sponsorships, endorsements, and merchandise and brand promotion. His videos have been sponsored by several brands like The Grind Shop, Root Industries, and Lucky Scooters.

Fox also promotes a huge variety of TFox merchandise on his website, TFoxbrand.com. He sells T-shirts, backpacks, stationery, school supplies and scooter accessories. Additionally, he has an exclusive range of limited version of items that are more varied than other online stores.

He is just 18 and already reached the height of success and that day is not far when he will enter the millionaire club.

His family home is in San Diego. He rarely lives there and often travels to different places. He has spent most of his time in Barcelona, Spain. He now lives in a mansion with fellow YouTubers Maverick Monstermav, Jordan Beau and others.

He owns a few sports car including a Ferrari and a Lamborghini.

San Diego-born Tanner Fox learned to ride a scooter at an early age. His early inspirations were other renowned riders like Dylan Morrison and other numerous stunt riders. In September 2011, he created his channel MTFilms and uploaded a short and sweet video of 40 seconds.

He then continued to upload videos, gaining plenty of scooter fans as new viewers. In January 2012, he started uploading stunt tutorials and his first tutorial video was ‘How to Finger Whip. Following that, he uploaded numerous tutorials including Truck driver and other guides for novice riders.

Initially, his videos could not reach to a large audience but, in August 2012, his ButterCup tutorial went viral, watched by over 2 million people in a short period. It also rapidly boosted his subscribers and followers. On October 21, he uploaded a new video which gained over 20 million views and many subscribers.

His success is as much due to his personality combined with his scooter riding skills. He is a natural in front of the camera, friendly, confident and positive. These attributes helped him earn a fortune of $0.5 million at such a young age of 18. As of July 2018, he marked 7.8 million+ subscribers on his channel.