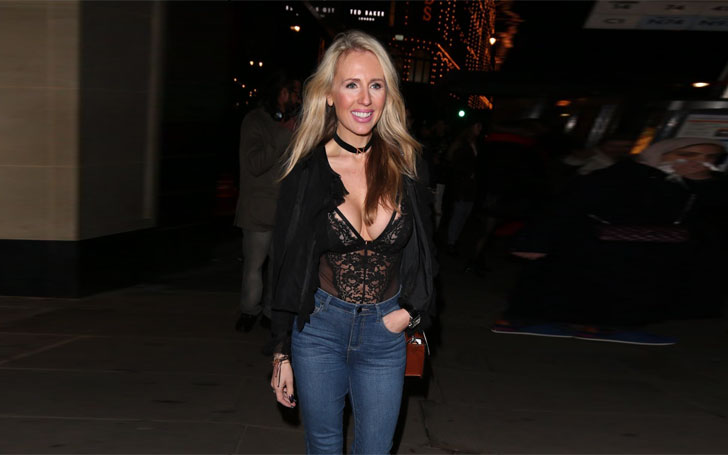 Fashion Blogger Naomi Isted is currently in the limelight for her spring/summer collection which she presented in 2017 London Fashion Week.

She is also famous as a television presenter, a fashion columnist for the Herald Scotland and beauty blogger for HELLO Magazine. One would think someone as successful and busy would hardly have a personal life, but no, not Naomi Isted, she is happily married!

Details About British Television Presenter Naomi Isted's Marriage- Who Is Her Husband?

Naomi Isted is a married woman. She is married to Haydn Isted. The couple got married in August 2009, and since then they have been together.

Naomi and her husband have two children, Rocco Isted and Fleur Isted. The couple is fond of each other, and they love spending time together.

Isted appears with her husband Haydn at several events, most recently, they appeared together at a charity gala screening of "Cars 3". On the event held at Vue Westfield on July 9, 2017, in London, the pair made an appearance with their children.

Naomi and Haydn are happily married since 2009. The proof is all over their social media as they both love posting happy family moments on their respective Instagram and Twitter. The British television presenter enjoyed a fantastic day at Tulley's farm with her family recently.

The pair also appeared together at the film screening of The Nut Job 2 on 7 August, Naomi posted a picture from the event on her Instagram immediately after:

The thirty-eight years-old fashion blogger seems to love enjoying time with her family. Isted never forgets to remind herself how proud a mother she is, here's an Instagram post that says the same.

The proud mother then expressed her happiness writing:

"Soo proud of our #littlegirl getting an #award today at #speechday & everyone else #welldone what a lovely #ceremony and day with lovely friend."

Haydn also shares about his family on his social media on various occasions. He Instagrammed to wish his wife on the occasion of their wedding anniversary on 14 August 2017.

Before Naomi, Haydn was married to Louise Adams who is  Victoria Beckham's sister.The couple has two children together.