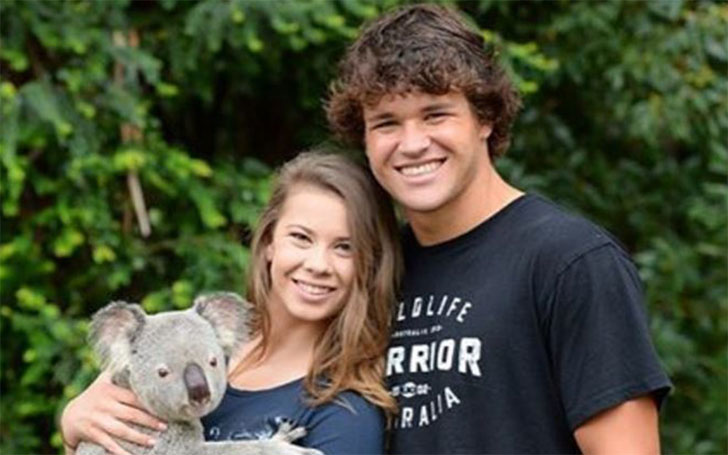 Bindi Sue Irwin, an Australian actress, television personality and Wildlife conservationist is a daughter of Steve Irwin, Star of the movie The Crocodile Hunter.

The Australian actress has opened up about her marriage plan with her wake boarder boyfriend Chandler Powell.  She doesn’t think at a point where marriage and getting engaged is really a huge priority for her right now.  She clearly denied the rumors of her marriage with Chandler.

Happy birthday to the most amazing person I know. I'm amazed by everything you have already achieved and I can't even begin to imagine everything you'll accomplish from this point on. I'm very blessed to have you as such a huge part of my life and I'm beyond thankful you've let me be a part of yours. I hope today is as amazing as you are??

Bindi Irwin and Chandler Powell met in November 2011. Powell was with his family for a trip to wakeboarding event and he stopped in Australia zoo to spend his day with the Irwin family and the staff.  During that time, Powell takes Irwin’s contact information down through the zoo and gave her his email address and they stayed in touch became good friends.

Later on, their friendships turned into romance. The pair continued their long-distance relationship, depending on Skype to keep in touch.

On Sunday, she posted a beautiful throwback photo on Instagram of herself with her mom and dad when she was a baby giving a tribute to her late dad. Irwin lost her father in 2066 after stingray stabbed him in the chest during the filming of an underwater documentary and then she followed the footstep of her dad and became a conservationist.

Hello lovelies. Well today marks 18 years of life for me, here in Australia and I really don't know where to begin in thanking so many people for an unforgettable journey so far. So I think that I'll start here, with this photograph. This photo was taken within the first year of my life. To be perfectly honest life has changed in a million ways since this photograph was taken. Along the way we gained another incredible part of our family, my brother Robert. Our conservation work with Wildlife Warriors took off around the world. Our home, Australia Zoo continued to expand and has become the greatest zoological facility on planet earth. Our Dad, Mum's soulmate and a superhero for us all, passed away. However, since this photo was taken, 18 years ago, one life ingredient has remained, unchanged, unbreakable. That is the unconditional love that is shared between my beautiful little family and the loyalty we have to eachother and everyone else who has taken this journey with us. I don't think that when this photo was taken even my beautiful parents could have known what life would evolve. I know that I am endlessly grateful for the love and light I have been given since Day 1 of my life.

Two of her famous movies are Return to Nim's Island and free willy: Escape from pirate's Cope.

The estimated net worth of Bindi Irwin is around $3 million. She had got her vehicle license in March and rumors are there that many car companies are ready to make an offer to her as a role of an ambassador for their companies.