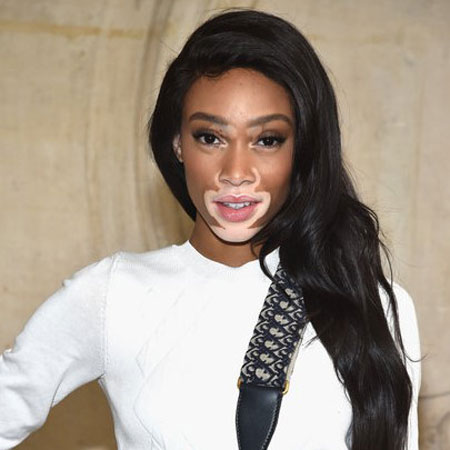 Winnie Harlow is a Canadian fashion model, spokesperson as well as activist who gained prominence as a contestant on the twenty-first cycle of the U.S. television series, America's Next Top Model while having a prominent form of the skin condition vitiligo. The fashion model has also amassed a mega fan following on her Instagram account with over 5.5 million followers, as of Jan 2018.

Harlow has been in a relationship with a rapper and singer Wiz Khalifa for a few months.

Chantelle Winnie was born as a Chantelle Brown-Young on July 27, 1994, in Toronto, Ontario, Canada. She belongs to Canadian nationality and ethnicity wise, she is of Jamaican descent.

Winnie is the daughter of Lisa Brown and Windsor Young. She grew up with her sister Christina Harlow.

In her early age of four, Winnie was diagnosed with the chronic skin condition medically termed as depigmentation of portions of the skin.

Due to that condition, Winnie faced a lot of hardship at a young age. During her school days, she was bullied for her unconventional looks and was also called ‘cow zebra’ by her friends.

Winnie's skin ruins her personal life too. The constant bullying at school depressed so much that she decides to quit her studies. Even she was thinking of committing suicide and end her life.

Winnie modeled for the fashion magazines including I-D and Dazed as well as fashion website Showstudio.com.

In October 2015, Winnie spoke at the Dove Self-Esteem Project panel at the 2015 Women in the World Summit. She was presented with the 'Role Model' award at the 2015 Portuguese GQ Women Of The Year event.

Winnie Harlow's Net Worth And Salary

Winnie Harlow has earned a decent amount of net worth from her various works. She has an estimated net worth of around $3 million, as per Celebrity net worth, in 2019. Moreover, she is one of the successful Canadian fashion models and her annual salary is over $200K.

Harlow has amassed a mega fan following on her Instagram account with over 5.5 million followers, as of Jan 2019. Her Instagram account plays one of vital role to boost up her net worth as the instagram star who has over million followers can make over $15 K a sponsored post. The model has earned a majority of her money from her various endorsement deals with numerous well-known modeling agencies.

Harlow also collects a certain amount of money from her appearance in music videos.

Chantelle Winnie, 22, is not married yet. However, the gorgeous star is allegedly dating British F1 racer, Lewis Hamilton. She is having a good time with him and recently she celebrated a party with him, celebrating his victory in The British Grand Prix 2017.

The duo was first spotted together at the GQ Awards in September 2016. Since then, the pair has come closer and seen sharing quality times together.

They were also seen at the Amar Gala in Cannes on May 2017 which hints they're possibly dating each other. However, Winnie is yet to speak about her relationship with world champion racer Lewis Hamilton.

Harlow is currently dating a rapper, singer, and songwriter Wiz Khalifa for a few months. Their dating rumors became the headlines after she posted a photo on July 20 to her Instagram Story wearing his gold "Cam" chain. And the two officially confirmed their blossoming romance in August, after a few months of flirting on social media.

Just a month later the model was spotted with her boyfriend Khalifa exhibiting her kooky fashion sense in a light blue crop top. As of now, the two are very much in love. The rapper previously married Amber Rose. The two tied the knots in July 2013 and the following year they divorced.

In an interview with BBC News, Winnie talked about her skin and she also told that her skin doesn't define her