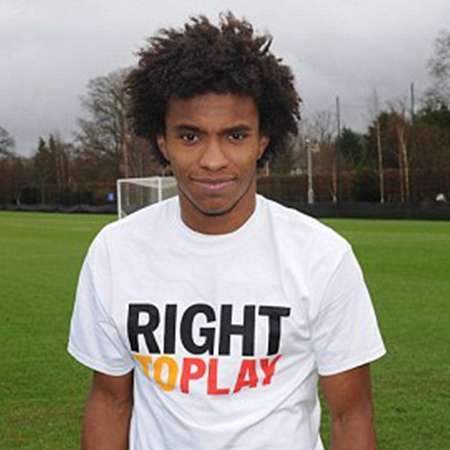 Willian Borges da Silva, commonly known as Willian is a Brazilian professional footballer, best known for his techniques and pa s sing skills and have been praised and talked in Europe. He has proved himself one among the best.

He currently plays as an attacking midfielder for Premier Club Chelsea Football Club and the Brazil National Football Team. He has an admirable willingness to work ceaselessly for his team.

He is versatile, intuitive, masterful and a midfield maestro. His dribbling, vision, and poise all catch the eye while his versatility also marks him out as the complete midfielder.

He has been named in Brazil's final 23-man squad heading to the 2018 World Cup in Russia.

He was born on August 9, 1988, in Ribeirao Pires Sao Paulo, Brazil. He is the son of Severino da Silva and Maria da Silva.

His mother, Borges, died at the age of 57 on October 13, 2016. His teammates Diego Costa and Eden Hazard dedicated their goals to Willian and his mother during the game against the Premier League champions, Leicester City.

Along with his teammates, his manager, Antonio Conte also dedicated their victory to Willian and his family.

Willian Borges da Silva is an attacking midfielder for Chelsea, who plays equally well on both flanks and in the attack. Willian is a product of Corinthians football academy, just as his teammate Dentinho.

He debuted his career from the Brazilian based multi-sports club, Corinthians in 2006. Willian started playing for the Corinthians wearing the number 10 jersey. He made five league appearances with the club during his first season with the senior side as Corinthians finished mid-table.

He joined Ukraine based club Shakhtar Donetsk in 2007. He signed a five-year contract with Shakhtar Donetsk for a transfer fee of €14 million. He debuted for the club on 15th September of that year resulting in a 2-1 league victory over Ch 0rets Odesa.

The Brazilian midfielder earned honors including five Ukrainian Premier League titles and the UEFA Cup in 2009, in his six years at Shakhtar. His very first season with the club proved fantastic stage for him to prove his footballing and the club turned winner of the Ukrainian Cup.

In the following season, Willian justified his status as first-team regular and helped the Miners to win the UEFA Cup. In 2008/09 season he appeared in 52 matches and scored 8 goals.

Willian had an impressive run in Ukraine which earned him the honor of the Best Player of the Ukrainian Championship. This attracted Chelsea scout in the summer of 2012, however, the Ukrainian club refused to let this magician go away from then.

In 2013, he finally quit the club for 35 million Euros and moved to big-spending Anzhi. After just 6 months a crisis struck the Russian side and Willian looked for other options.

In August he was strongly linked with Tottenham Hotspur but preferred to join Chelsea in a deal worth 32 million pounds.

In 2007, Willian made 11 appearances for Brazil U-20. On 27 October 2011 Willian da Silva was called up to represent the senior Brazil side in the matches against Gabon and Egypt. In both matches, the Brazilian halfback came on as a second-half substitute.

Willian's Net Worth, Awards, and Achievements

He consolidated his reputation as one of the most promising defenders in world football thanks to his cla s s and excellent positioning. He has already achieved a huge amount of success and with this dedication, he can continue to move on his path of success.

He receives a salary of €2.5 million according to a data record of 2013. He’s a quiet, family man, his sparkly earrings the only real clue to his wealth. He’s incredibly shy but clearly likes what he sees in Brazil.

Willian stands at the height of 1.74 m and weighs 75 kg. He is a married man and has two children.

He married Vanessa Martins in 2011. The couple shares twin daughters Valentina and Manuella. He resided in Kingston-upon-Thames with his wife and daughters during his European trip.