Will Gold, who is professionally known as Wilbur Soot, is a famous British internet personality, musician, singer-songwriter, and Twitch streamer. The 24 years old grabbed worldwide attention in 2017 for his work with the group comedyYou Tube channel titled SootHouse.

Wilbur Soot’s real name is Will Gold. He was born on 14th September 1996 and is currently 24 years old. He was born in Suffolk, England, and belongs to British nationality. His ethnicity is Caucasian-white.

Wilbur attended Sussex Downs College. Besides this, he is yet to reveal information about his family, parents, and siblings.

Wilbur is a famous internet personality known for his work on YouTube and Twitch. He grabbed attention for being the editor of the YouTube group channel, SootHouse. The channel is about reaction videos, memes, life hacks, and other topics.

On 29th March 2019, Wilbur created his main channel, Wilbur Soot, where he posts videos relating to games relating to Minecraft. He also started a podcast named Hey and Stuff on 3rd April 2021.

Besides being an internet personality, he is also active in a musical career. He is also a singer-songwriter and multi-instrumentalist, releasing his first single, The “Nice Guy” Ballad. He has released two albums, Maybe I Was Boring, and Your City Gave Me Asthma.

Wilbur has released singles like I Am Very Smart, Maybe I Was Boring, Soft Boy, Your New Boyfriend, Internet Ruined Me, Karen, Please Come Back I Miss the Kids, I’m in Love with an E-Girl, and many others.

The YouTube personality’s current relationship status is quite confusing. It is not clear if he is dating or single.

However, previously, he was rumored to be dating fellow streamer Nikita “Niki” Nihachu. It was reported that they became closer after streamer together and even played a virtual dating game which he won.

During the time, they seemed to really enjoy the company. Similarly, the internet personality was captured traveling to Germany, where Niki lives. But it is not clear if he traveled to Germany to meet her or not.

Wilbur, who has 2.2 million followers on Instagram, often posts pictures of his friends and teammates. 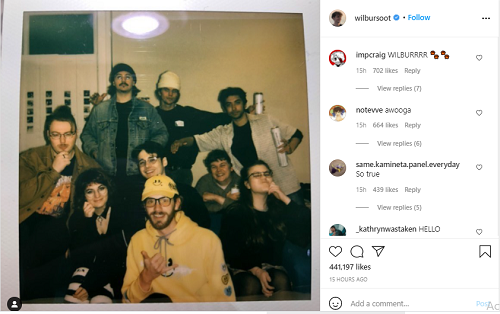 As of 2021, Wilbur Soot’s net worth is reported to be around $2 million. The internet personality is known for being a content creator on YouTube and Twitch. His main channel has 4.63 million subscribers with 459.3 million total views.