Why Did Simon Saran And Farrah Abraham Breakup? Reason Revealed Here! Details About Their Relationship 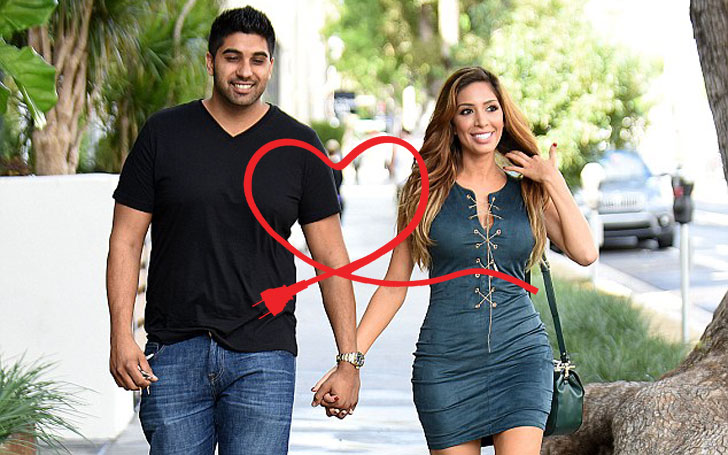 Simon Saran and Farrah Abraham are notorious for their unstable relationship. The on/off Teen Mom (2008-present) couple has broken up and patched up multiple times by now.

The couple's love-hate relationship with each other has gone on for years! But is this the end now? Simon and Saran have apparently broken up now. And for real this time!  But have they really broken up?

What's the relationship status of Simon Saran and Farrah Abraham?

Simon Saran and  Farrah Abraham's is finally over. Yes, you heard it correct. Finally, the roller coaster has come to an end.

The former couple Simon and Farrah together before their break up

It was in 2014 when Farrah Abraham met the real estate agent Simon Saran and now they are no more together, however, as stated by Farrah, they are still friends.

And in response to that Abraham's former boyfriend stated that

I'm excited for her, If she can find someone that can be in the same room as her, that's a huge accomplishment.

But at the same time, there is another story to the situation. As believed Simon Saran is not happy with MTV as it created fake news of Farrah dating other guys so the channel could create a new reality TV news. He thinks MTV abused his Twitter account.

What Does Simon Saran Say About his Former GIrlfriend Farrah Abraham?

When it comes to Simon, there is a lot thing that he shared with the media, from showing respect to his father to accusing her of enjoying the fake life unlike him.

Given that I have respect for her dad, I'll let her slide, I don't need drama in my life at this point. She can say what she wants, but we all know who the real one is and who the fraud is.

I have no hard feelings against Farrah. We are just from two different worlds. She likes the fake life, I want what's real. I wish the best for her and much success in all of her future endeavors.

So this was Simon's part of the story, but hey! what about Farrah? Let's see what she has to say about the whole situation.

Farrah has a completely different story to tell. She once wrote to her 1.2 million followers that Simon has been using her to get all the attention and money which doesn't sound right at all. Well, here's what she said

@SimonSaran why are you trying to get attention, your pathetic & im a great mother, professional, friend & women go STOP using me for money, FYI Simon is not in my life and really is hurt I've moved on free ride is over! Stop talking about me & tv if your over me lmao.

I'm happy I get to travel the world and meet great people unlike you at home stalking my dates and social Thank me for making you! Jealous.

This has been quite a public debacle. Do you think they'll ever get back together again?