American former football offensive tackle Michael Oher grabbed international attention for being one of the subjects of Michael Lewis’s 2006 book, The Blind Side: Evolution of a Game, which was also featured in the Academy Award-winning 2009 movie The Blind Side.

The 35 years old former football offensive tackle openly shares his professional details but keeps his lips sealed while asked about his personal life. One thing is clear that the handsome hunk is a married man. So, who is his wife? What about his kids? Everything below:

Who Is Michael Oher Married To?

As Oher maintains an extremely secretive lifestyle, many of his fans might not know that he is a married man. It is confirmed that he is married; however, details of his wife remain missing. He has not even shared the slightest details of his marital life.

Even the name of his wife is not revealed. But, as per a couple of sources, his wife manages a private Instagram handle 7tiff4tiff. His wife was once seen with him while he took a photo with the Director of Football operations for UCF Football.

There were numerous rumors of Oher being in a relationship with Tabitha Soren. But, it is not true. They are neither dating nor have ever been involved in a romantic relationship.

Tabitha is actually Michael Lewis’s wife. Her husband is the author who wrote the book having Oher as the subject. 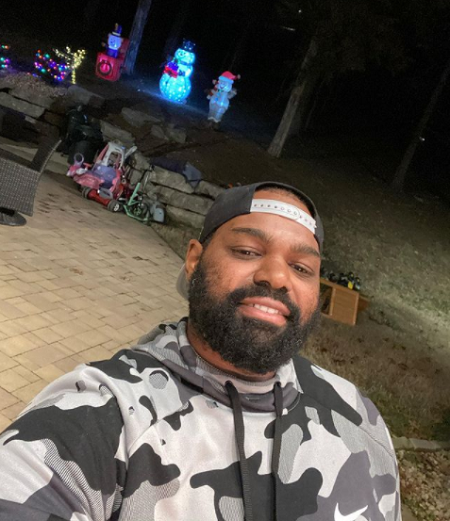 CAPTION: Michael Oher keeps everything of his personal life away from the media SOURCE: Instagram @michaeloher

Tabitha and Lewis are happily married. The pair got married in 1997 and has been inseparable since then. The duo shares three children, Dixies, Quinn, and Walker. Sadly, their daughter Dixie is no more. She died in a car accident.

How Much Is Michael Oher’s Net Worth? His Grand Mansion!

It has already been over a decade since Oher started his professional career. Within a decade-long professional journey, he has grabbed huge attention and also won many awards and honors.

According to Celebrity Net Worth, Michael Oher’s net worth is reported to be around $16 million. His annual salary is $2.7 million.

Back in 2014, Oher bought a grand mansion in Brentwood. The cost of the mansion is $1.3 million.