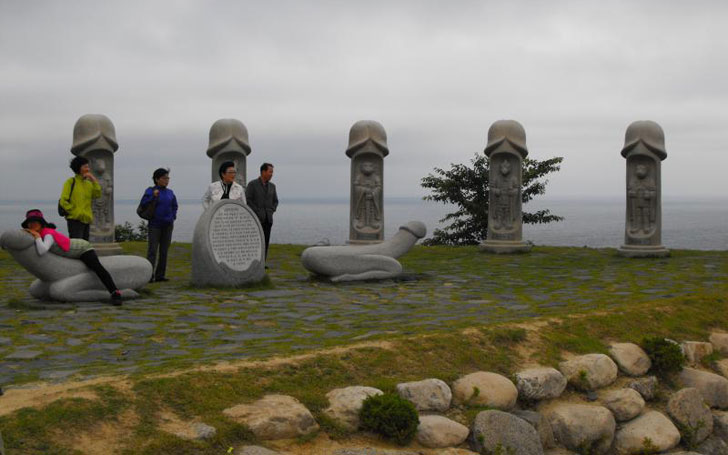 Every country has own set of weird attractions, but not all these attractions can be included in official tour guides, and one among these places is Haeshindang Park of South Korea. The park, also known as ''P*nis Park" (unofficial), is a theme park located on the beautiful coast of Sinnam, and the theme is penises.

It is still unknown when the park, renowned for many phallic statues, was built and came into being.  The park is believed to have built in a memoir of young virgin women who died in the nearby rock by drowning during the storm. The women were reportedly left by their fisherman lovers while they went far for fishing.

Sculpted penises in the Haeshindang Park

After the huge storm, the fish stock in the lake and the nearby sea dried up, and they didn't come back which the locals believed they had been cursed by the virgin women's spirit.

Days later, a man ejaculated into the sea in a belief that it will pacify the spirits and the fish will return the sea and surprisingly, the idea worked. As the result, the people began erecting the penises in front of the sea in the myth that it would keep the dead women's spirit happy and their fish stocks buoyant.

Giant totem poles in the penis shape in the Haeshindang Park, South Korea

Later, the locals erected the giant penis sculptures and built it as one of the unique parks. The park has some stone, some wooden, and emotive penises appearing everywhere in its circle. Even the wind chimes, totem poles, benches and little armrests are given the penis shape. Even more, some of the structures are given the faces and limbs.

Tourist sitting in the phallus-shaped structure in the park

The park has dozens of sculpted wooden erected penises which measure from three meters (10 ft) in length. The artistic pieces also include a fence made up of penis-shaped posts, a penis-shaped canon, and a yawning man with a phallus emerging out of his mouth. A small museum comprising penis-related art can also be found at the park.