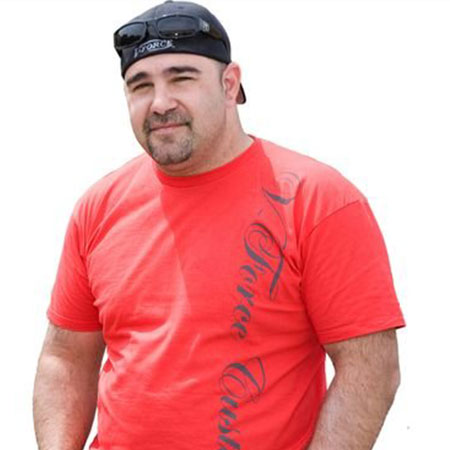 Vincent Vinnie DiMartino is an American motorcycle builder and Television personality, best known for his work at Orange County Choppers (OCC) from 2002 to 2007. He was also featured in an American TV show, American Chopper. His other television credit includes Throttle Junkies TV.

Vincent DiMartino was born on 9th October 1972 in Hudson Valley, New York to father John DiMartino, and mother Margaret DiMartino. He has an American nationality and he belongs to the White American ethnicity.

He was born second among the four children of his parents. Besides this, there is no information revealed regarding his family, early life, and his educational background.

Vinnie started helping his father in repairing works from an early age of 9. He then began working for small engine repairing shops and a few years later, he began rebuilding almost anything that fell in his hands.

Know what Vincent DiMartino is up to as of 2021 in the video given below:

He is best known for his work in Orange County Choppers. He joined the OCC in 2002 as a mechanic and later promoted to designer and fabricator. Vinnie was also a part of the reality TV show American Chopper from which he rose to the limelight.

In August 2007, Vinnie quit his job and started his own business. He and his co-worker, Cody Connelly started V-Force Customs, a custom motorcycles' business in Rock Tavern, New York. After he left out OCC lots of FAQs were discussing what factor cause led Vincent leaving the show. In the response, he said that,

I had gone as far as I could there. I really didn't have any chance for advancement, and I had always wanted to have my own shop, so the natural progression was to leave and start my own place. Nothing against them, but it was time to move on.

In 2010, Vinnie returned to TV alongside Paul Jr Design in American Chopper Senior vs Junior. The show was aired for two years and got canceled in December 2012. He then returned to his business and changed the name from V-Forces Customs to DiMartino Motorsports Automotives. He also expanded his business of customs bikes to car and truck repairs and maintenance.

The 46-year-old American TV personality has earned a considerable amount of fortune from his career. Although his exact salary is not disclosed yet, sources estimated his net worth to be around $2 million.

He earned ma s sive fortunes from the show American Choppers and also from his company V-Force Customs. Vinnie has also a YouTube channel under the name Vinnie DiMartino with over 56k subscribers from which he earns $23 to $365 dollars monthly to 4273 to $4.4k dollar annually. Further, he also earns a good sum of money from the ads in his YouTube videos.

Is Vincent Married? If Yes, Who Is His Wife?

Vinnie has kept his family away from the spotlight which keeps the information about them far from the media access. Besides this, there is no information, rumors, or controversies related to his past affairs, girlfriends, and divorce.

Vincent is active on social media; he has an Instagram account under the name 'dimartinomotorsports' which has over 25.7k followers as of 2019. Likewise, on Facebook with over 98k followers, and on Twitter with over 49.7k followers.

The video shown below shows Vincent Vinnie DiMartino talking about his children.