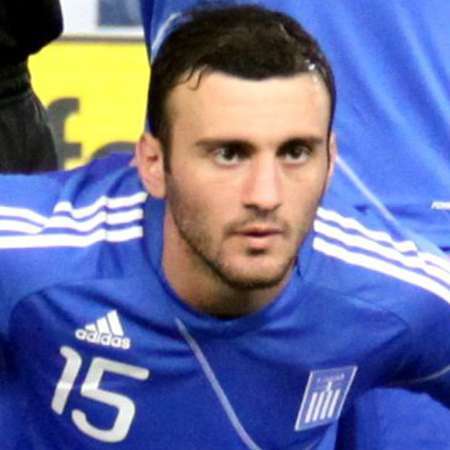 Vasilios “Vasilis” Torosidis is the name of a Greek footballer who is playing for the Greek Superleague club Olympiacos and also serving as the captain of the Greece national team. Prior, he played for an Italian Serie A Club A.S Roma from squad No.35 and from the Greek National Team as a Defender. Vasilis Torisidis was born in the year 1985 June 10 at Xanthi of Greece. This 28 years old Defender cherishes the height of 188 cm and the weight of 80 Kg. Vasilis Torosidis was born and brought up in Greece where he has finished his education. There is any information that has been disclosed and confirmed on his personal matters.

Vasilis Torosidis started his youth career from his native club Skoda Xanthi and made his debut from this club in the year 2007 at the age of 17. He had impressive seasons with Skoda Xanthi where he appeared in 76 matches making 3 prominent goals for the team. His performance attracted the interest of other three big clubs of Greece. Ultimately in 2007, Vasilis  Torosidis made his move to Olympiacos. He gained the experience of playing in 134 matches from the team scoring 12 goals before joining to Current Team of Roma in 2013. In the meantime with Olympiacos, Vasilis Torosidis was monitored by the clubs like Newcastle United, Roma, Juventus, Atletico Madrid and Bayern Munich.

After moving to Italian Serie A Club Roma, he has appeared in 29 matches scoring two prominent goals for the club. During the time, Roma has been the Runner-up to Coppa Italia. It has been more than a year that he is teamed up with this club. Vasilis Torosidis is in the team of Greece National Football Team since 2007. He has represented Greece in 63 matches scoring 7 goals for the nation. According to the salary statistics record for this player in 2013, his salary was recorded to be 2.5 million Euros. The agent of this player is George Kazianis who has marked his market value of worth 5.500.000 Euros. As of 2018, his market value is 700 Th. €. His highest market value was 8,00 Mill. € in Oct 23, 2009.

Vasilis Torosidis is a right-footed Defender. He is hugely versatile. He can play as a Full Back, Defensive Midfielder or Right Winger in the game and has played regularly from these positions for the club and for his nation as well. He has a strong grip on the ball. He has excelled in defensive contribution and strong enough to block the balls of the opponents to march forward in the pitch. He acts as a fence for them. However, his tackling and crossing are weak.

Thus, he does not dive into tackles. Vasilis Torosidis likes to play in short passes. He is good at marking in the short passes. He is good at speed and has the full on stamina to keep up in the game. He often does not go for long shots but so far with Roma, he made targeted shots with one beautiful goal. He is fearless and kind of stubborn in the game which gives uniqueness in his quality play.  Since there is no news of him having a wife or a girlfriend, we can assume him being single at present.