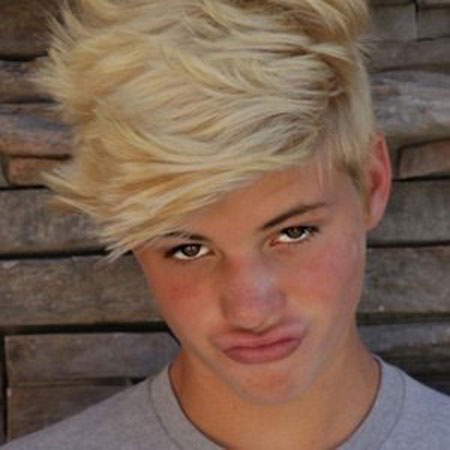 Musical.ly star and YouTuber, Tyler Phillips with his funny lipsync videos has earned him a huge fan following on musical.ly. Phillips along with his girlfriend Riley Lewis also runs a YouTube channel named, “Riley and Tyler” which has earned over 20k subscribers as of 2018.

Tyler Phillips was born on 6th May 2002 in the United States. He is American and belongs to White-American ethnicity/race.

Tyler began his career with the musical.ly app under the username tylerpofficial and with more than 200k fans as of 2018. He posts funny lip syncing videos on his account.

Tyler Phillips is also an Instagram star and has around 49k followers. With his girlfriend, Riley Lewis, he also has a YouTube channel titled, “Riley and Tyler,” created in April 2016. The channel has earned 20k subscribers.

Tyler Phillips is a rising social media star and is still a high school student. As of 2018, Philips' net worth is assumed to be in thousands and is expected to increase in the future. Along with his girlfriend, he has gained immense popularity from their YouTube channel, Riley and Tyler. Based on their channel's hit, they on an average earn around $95 - $1.5K yearly.

Tyler Phillips is in a relationship with YouTube sensation Riley Lewis, since 2015 and shares a healthy relationship. The couple met for the first time on August 18, 2014.

His favorite movie all the Conjuring series. His best friend is Ethan.