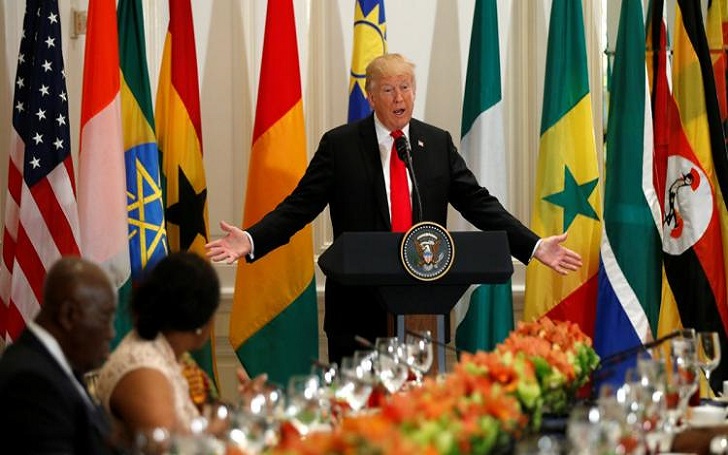 During the U.N General Assembly this Wednesday President of the USA, Donald Trump, sat with African leaders at a luncheon where he referred to a nonexistent country, Nambia. Twitter found out and wasn't having it, at all.

Donald Trump talked about ''Nambia'' during the opening remarks and then went on to say, '' Nambia's health system is increasingly self-sufficient'' in New York at the Palace Hotel. ''Nambia'', however, doesn't exist- the name seemed to be a collaboration of the names Zamia and Namibia which is a country in Southwestern Africa.

Later, a White House transcript came out clarifying that the president was referring to Namibia. Twitter wasn't going to shut down just with the clarification, so it made trolls, here are some:

1. Tweets started flooding in right after the speech:

Trump, at a lunch with African leaders, refers to the non-existent country of "Nambia." pic.twitter.com/N8megnC1Xi

2.  Twitteratis are quick at editing!

Footage of the Prince of #Nambia leaving the @UN after meeting with @realDonaldTrump. // @KagroX @dailykos pic.twitter.com/85vXKH5Q2E

3. That's some good advice! Is it though?

#Nambia is truly beautiful this time of year. Everyone should visit at least once in their lives. Just take Psilocybin to get there.

4.     Did you know Nambia was famous for covefefe?

I love the smell of #Nambia in the morning! #MAGA #Namibia #Trump #POTUS @realDonaldTrump @POTUS pic.twitter.com/GtAHc4J9Fg

Please some one trick him in to talking about Equatorial Kumar or Wakanda https://t.co/CnqQc4uad2

Namibia is located to the north of South Africa for its diamonds,  stunning landscapes, and deserts. Also at the luncheon, Trump talked tremendous business potential'' in Africa.