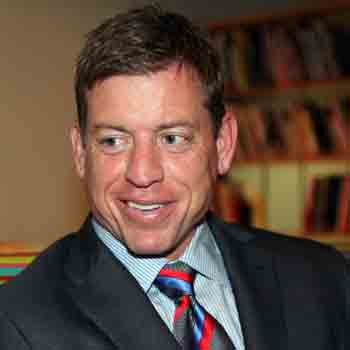 Troy Aikman, a former American football quarterback, spent 12 years of his career playing for the Dallas Cowboys in the National Football League. He was the number one overall draft pick in 1989. Troy played in twelve consecutive seasons for the Cowboys as a quarterback. During his career in American football, he was a six-time Pro Bowl selection leading the team to three Super Bowl victories. He was the Super Bowl XXVII MVP. Due to his outstanding career in Professional American football, he was elected to the Pro Football Hall of Fame in 2006 and also in the College Football Hall of Fame on December 9, 2008. Following his retirement from the sports arena, he currently works for the Fox Network as a television sportscaster. Talking more about his works, Troy was a co-owner of the NASCAR Sprint Cup Series, part-owner of San Diego Padres, and Hall of Fame Racing.

Born in the year 1966 November 21 in West Covina, California, Troy Aikman was raised in Cerritos before his family moved to Henryetta, Oklahoma, when he was 12 years old.

He attended high school in Henryetta where he used to play Baseball. But instead of playing Baseball, he became more interested to pursue his career in American football, thus attended the University of Oklahoma where he was trained by head coach Barry Switzer.

Troy Aikman's career began to baby walk as he began to play from his college with outstanding performance. The way of success had been friendly to Troy so he started to be amongst the popular young athlete and in the world of American football.

Before joining Dallas Cowboys in 1989, he used to play for UCLA from 1986-1986. He was the No.1 overall pick in the 1989 NFL draft by Dallas Cowboys. He has won several of the awards during his career which include Consensus All-American 1989, Davey O’Brien Award 1989, six times Pro Bowl, Sporting News First-Team All-Pro in 1993, three times UPI Second-Team All-NFC, three times SuperBowl champion, Superbowl MVP, three times NFC Champion.

After his retirement from football, he started to work as a color commentator for Fox’s Network NFC telecasts. Because of her talent and skill, within a year at Fox, he was named to the network’s lead announcing crew along with Joe Buck and Cris Collinsworth.

He has received an Emmy Award nomination in 2004 for his work and has helped the network to broadcast four of the SuperBowls to date. He also hosts a weekly sports radio show on Sporting News Radio on Thursday aired from 7-8 pm.

He has established the Troy Aikman Foundation, which is a charity organization established with the motive to benefit children. He is a member of the National Football Foundation Board of Directors. He is also a co-spokesman for Rent-a-Center along with Hulk Hogan. In 2011, he became a part of the Oxford Preparatory Academy Charter School Advisory Board in South California.

In March 2014, he has been announced as a partner and spokesman for IDLife. He is also involved in the Hall of Fame Racing since late 2005.

This busy and professional public figure has a current net worth of $25 million and enjoys high salary pay. As a commentator from Fox, he earns a salary of $1 million per year. His salary ranged from $787,000-$4.5 million during his playing career as a quarterback from the year 1989-1997.

Troy lives in his big luxurious house situated in Highland Park, Dallas. In 2013, he spent around $9 million to buy two houses. In the year 1989, the player signed a contract with the Dallas Cowboys for a staggering amount of  $11.04 million. At that time he was paid around $787 K.

Troy Aikman was married to former Cowboys publicist Rhonda Worthey on April 8, 2000, in Plano, Texas. The couple announced their separation on January 24, 2011, following their divorce on April 12, 2011. After divorcing him, she has not revealed publicly her relationship status.

Aikman has two daughters from his ex-wife named Jordan Ashley Aikman born in 2001 and Alexa Marie Aikman born in 2002. Aikman is a popular man still today and lots of woman dreams of him. He has good height, good looks as well a good physique.

He is a popular personality. Before his marriage, he was once named as the most eligible bachelor in Dallas by the Texas Monthly Magazine.

He previously dated country singer Lorrie Morgan. Also, there are wide rumors that American actress Sandra Bullock and Janine Turner had been his girlfriend once.

His biographies and other articles on him can be found over the internet on different internet websites including Wikipedia, IMDb, etc. He also has his own personal website which is the public site to his Troy Aikman Foundation, www.aikman.com.