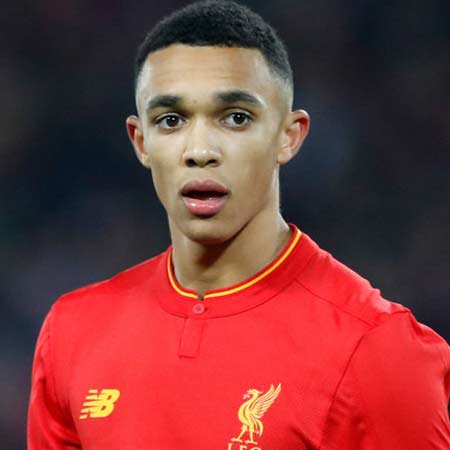 The rising English professional football player, Trent Alexander-Arnold won Liverpool Young Player of the Season twice. Alexander- Arnold is currently playing as a right back for the Premier League club, Liverpool. He made both junior and senior debut playing for Liverpool. He began his training from the very early age of 6.

Alexander-Arnold represented English national team in various youth levels. He will be part of Gareth Southgate’s squad for the 2018 World Cup in Russia.

#TBT The first image is me collecting a trophy from my local boys club. Every kid who loves football.....wants to be a footballer. I can't tell you the exact moment I wanted to become a footballer. But I can tell you moments like this made me want to be one. As the years progressed, I quickly understood the hard work & sacrifices which go into being a footballer. The other image reminds me of playing football in my street as a kid. It wasn't long ago I was THE fan standing outside training trying to catch a glimpse of my idols. #WillFindsAWay from @underarmouruk gives you motivation to overcome setbacks. The hard work hasn't stopped. The hard work is just beginning. #WEWILL

Trent Alexander-Arnold was offered to join the Liverpool's academy after being spotted by Ian Barrigan (a coach) in a community summer camp hosted by the club in which his school was also invited. He got a chance to represent his school in the camp after his name was drawn from a hat. He trained two or three times a week and eventually went on to captain the club at U-16 and U-18 squad under coach Pepijin Lijnders.

Manager, Brendan Rodgers selected Alexander-Arnold in the first team squad for the final pre-season friendly match against Swindon Town in the season 2015-16. The team won the match 2-1.

On 25th October 2016, he made his first-team debut in EFL Cup in a 2-1 win over Tottenham Hotspur. For his performance, he earned a spot in the ''EFL Cup Team of the Round'' with Daniel Sturridge. On 8th November 2016, he signed a long-term contract with the club. He made his first assist for the club for the opening goal of 2-0 victory over Leeds United. His contribution earned him the Man of the Match title.

At the beginning of the season 2017-18, he again signed a long contract with the club. He scored his first goal for the club in his European debut in 2-1 victory over Bundesliga team Hoffenheim. After Micahel Owen and David Fairclough, he became the third player to score in their European debut for Liverpool.

Alexander-Arnold became the youngest British player to start in a Championship League quarter-final match on 4th April 2018. He was named ''Man of the Match'' for his strong performance in 3-0 win over Manchester City. He impressed everyone with his amazing records. On 10th May 20178, he won the ''Liverpool Young Player of the Season Awards'' for the second season running.

Trent Alexander-Arnold represented his national team at various youth and senior levels. Alexander-Arnold scored twice for England U-19 on 7th October 2016 in a 3-1 victory over Croatia. He again scored twice on 24th March 2017 in a 3-0 win over Spain which helped England to qualify for the 2017 UEFA European Under-19 Championship.

In March 2018, Alexander-Arnold was called-up for a friendly match against Italy and Netherlands. In May 2018, he was selected in Gareth Southgate’s squad for 2018 World Cup.

Trent Alexander-Arnold has an estimated net worth of $2 million as per some online sources, but, the amount is not made official. Alexander-Arnold earns a salary of €40k ($47007.12) per week from Liverpool. His current market value is €7.20 million ($8.46 million). He also earns an impressive amount from his endorsement deal with Under Armor.

The young player, Alexander-Arnold is involved in many local charities including An Hour for Others. He is a volunteer and an ambassador of the charity firm. He stated,

‘’ It was my best friend’s auntie who started the organization. Me and my best friend were asked if we ever made it would we help out. It was something I have always wanted to do. So since I have had the chance to influence the public on a high level I have used it to give knowledge to people about the organization and the good things that go on in the community, as opposed to the bad things you see all the time. It is definitely an organization I am happy to be involved with.’’

The young and talented player, Trent Alexander- Arnold, is focused on his career rather than involving in any serious relationship. The rising English player has not been spotted with any ladies, so it can be assumed that he is possibly single at present.

Besides, the rising player is close to Adam Lallana.

Here is the video which shows the skills and goals of Trent Alexander-Arnold: