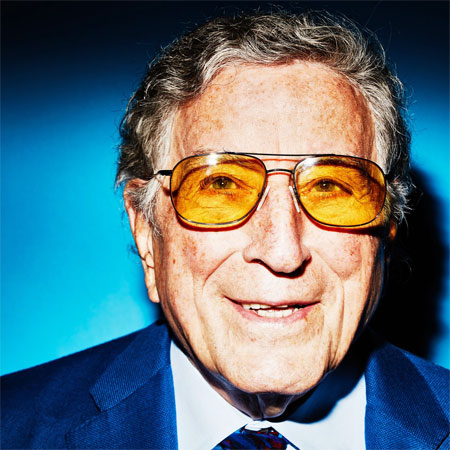 Born and raised in Astoria, Tony Bennett is a traditional pop American singer. Bennett started singing at a very young age of 10 and was first recognized by Pearl Bailey. Bennett is also known for his big band, show tunes, and jazz.

Besides, Bennett is also a painter, author, and founder of the Frank Sinatra School of the Arts in New York.

Tony Bennett was born Anthony Dominick Benedetto. He was born on 3rd August 1926, in Astoria, Queens, New York. He is a son of John Benedetto and Anna Suraci. His father died when he was 10. Bennett is an American by nationality and belongs to Caucasian ethnicity.

Bennett learned painting and music at the School of Industrial Art but couldn't continue his study and started working as a singing waiter. Bennett also attended the American Theatre Wing after serving the United States Army during World War II.

In 1949, his talent was first recognized by Pearl Bailey who offered him for her show in Greenwich Village. Then, Bob Hope gave him a chance in his road show. Bennett then started working with record producer, Mitch Miller and gave his first big hit, Because of You.

In the late 1950s, Bennett developed his interest in jazz music and produced tracks, Jeepers Creepers and Chicago featuring Count Basie, Basie Swings, Bennett Sings. In 1962, Bennett gained more fame with the release of I Left My Heart in San Francisco. He also received his first Grammy Award for the song.

Bennett then rose to stardom after the success of subsequent hit tracks like I Wanna Be Around and The Good Life. Bennett then released several tribute albums, Perfectly Frank, Steppin’ Out and Tony Bennett on Holiday.

Bennett released A Wonderful World featuring k.d. Lang in 2002 for which he received another Grammy for Best Traditional Pop Vocal Album. In 2006, on the occasion of his 80th birthday, he released Duets: An American Cla s sic, featuring Barbra Streisand, Elton John, and Sting.

Following the success of the album, he released another celebratory album in 2011, Duets II which includes The Lady Is a Tramp featuring Lady Gaga and Body and Soul featuring Amy Winehouse. In 2014, he collaborated with Lady Gaga and released an album, Cheek to Cheek for which Bennett received another Grammy for Best Traditional Pop Vocal Album.

Apart from being a singer, Bennett is also a painter and known as Anthony Benedetto. His paintings were featured in Smithsonian and the Metropolitan Museum of Art.

Bennett is also an author of best seller books, Tony Bennett: What My Heart Has Seen, The Good Life: The Autobiography of Tony Bennett, Tony Bennett in the Studio: A Life of Art & Music and Life is a Gift: The Zen of Bennett.

Tony Bennett is currently married to Susan Benedetto who is a former social studies teacher. The couple tied the knot in an intimated wedding ceremony on 21st June 2007.

Benedetto and Bennett first met at one of his concerts. At the time Benedetto was at her early 20s whereas Bennett was in his early 60s. The couple started dating in the late 1980s soon after his divorce with Susan Grant, his second wife.

The couple got separated in 1965. The reason for their divorce was Bennett who could not give time to his family and spent most of his time on the road. Their divorce was finalized in 1971. Soon after his separation with Beech, he started dating the actress, Sandra Grant in 1965. They got married on December 29, 1971, in New York. The couple together shares two children: Joanna Bennett born in 1970 and Antonia Bennett born on April 7, 1974. They separated in 1979 and their divorce was finalized on July 1, 1983.

Bennett then started using cocaine and marijuana in the late 1970s, however, his son, Danny, helped him regain his personal and professional lives back working together as his personal manager.

Tony Bennett's estimated net worth is $200 million. Bennett earned most part of his net worth from his successful musical career. till date, 50 million recording of his albums are sold and has made several live performances.

Bennett's paintings were also featured in ARTnews and several other magazines and most of them were sold in $80,000 individually.

His best seller books Tony Bennett: What My Heart Has Seen and Tony Bennett in the Studio: A Life of Art & Music also helped to add a figure to his net worth.

Reportedly, Bennett listed his six bedrooms 9500 square-foot house on the western-most promontory of Belvedere Island OD worth $27,500,000 for sale.

Tony Bennett and his wife Susan Benedetto together established an arts education charity, Exploring the Arts worth $78 million. They also founded the Frank Sinatra School of the Arts in Queens, New York.