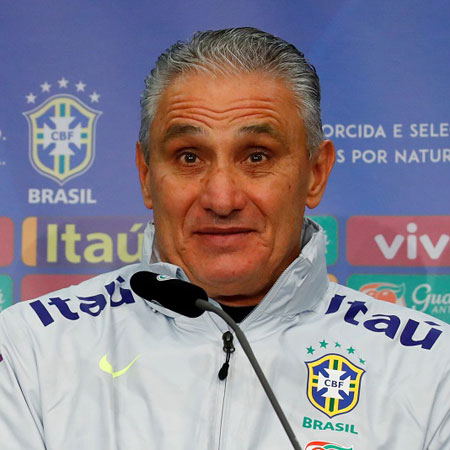 Adenor Leonardo Bacchi aka Tite is a former professional football player who currently manages Brazilian national team. The manager and former footballer grabbed the public attention for his successful stint at Corinthians. He managed the team from (2004-05) and then from (2010-13). During his extensive managerial career with the club, he led the team to their first Copa Libertadores title and a second FIFA Club World Cup title. As a footballer, Tite played for some world's top clubs including Caxias, Portuguesa, and Guarani. Throughout his club career, he made 33 appearances and scored 6 goals. He also won the 2015 Campeonato Brasileiro Series A.

Tite who was born Adenor Leonardo Bacchi on 25th May 1961, in Caxias do Sul, Brazil to mother Ivone Bchi and father Genor Bachi.  He grew up in  Caxias do Sul along with his sisters Ademir Bacchi and Beatriz Bachi. Tite belongs to Brazilian nationality and regarding his ethnicity; he has a mixed ethnical background.

Tite attended Instituto Estadual de Educação Cristovão de Mendoza under his physical education tutor Luiz Felipe Scolari. Scolari was impressed by his mind-blowing performance at the school and gave Tite his first shot at football by introducing him to a professional football club Caxias, based in his hometown.

Tite graduated from the Pontifical Catholic University of Campinas and started his football career soon after. He joined Caxias in 1978 but gained much appreciation as a player when he joined Guarani in 1986. He showed his impressive technique, vision, and natural goal-scoring ability while playing for Guarani from 1986 until 1988. And he also landed his first role as a manager for the same club in 1990.

Tite made his managerial debut following his agreement with the football club Caxias in 1999. Later on, he joined Gremio in 2001 and lead the Porto Alegre squad to win another Gauchao title, beating Juventude in the finals.  He was subsequently hired by São Caetano do Sul club Associação Desportiva São Caetano and helped the team to reach the fourth place in the league table of the 2004 Copa Libertadores.

Following his replacement by Muricy Ramalho, before 2004 Campeonato Paulista, he went on to join Internacional in 2008. After the arrival of Tite as a manager at Internacional in the 2008-09 season, he led the club to reach the sixth-place finish in 2008 Campeonato Brasileiro Serie A.

Under Tite, the club also won the 2008 Copa Sudamericana, defeating Argentine club Estudiantes de La Plata in the final. He previously coached the club Corinthians from (2004-05). And he again joined the club after Corinthians approached him to replace coach Adilson Batista. After his long coaching career with the club, Tite announced his retirement when his contract was not renewed on 14th November 2013.

He then rejoined Corinthians on December 15th, 2014. He became the Campeonato Brasileiro Série A Coach of the Year 2015.

After years of managerial experience, Tite finally got the opportunity to become the manager of his own country Brazil. The big news was announced in June 2016.  His first game as a manager was in 1st September 2016 when Brazil successfully defeated Ecuador during the 2018 World Cup qualifying match.

Tite led his team to seven consecutive victories in the qualifying match, making them the first team to select for the 2018 World Cup and secured a spot at the World Cup in Russia.

During his extensive managerial and football career, Tite has collected a hefty amount. The exact amount of his net worth is not disclosed yet, but as per some reliable online sources, his net worth is speculated to be over $5 million.

As a manager of the Brazil national team, Tite earns around $4,272,152.5 as an annual salary. He has also acc u mulated a huge amount of fortune from his endorsements deal with several well-known brands.

Tite and his wife also have also a daughter named Gabriele Rizzi Bachi. The pair is together for more than three decades and is still going stronger.

Here are some interesting facts about Tite: