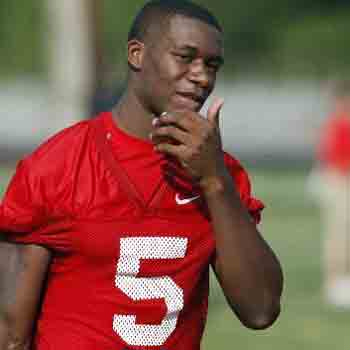 The big, athletic American footballer, Timothy Wright plays in his current team New England Patriots of the National Football League (NFL). Wright is a tight end for Patriots. Earlier Wright played for Tampa Bay Buccaneers; he was a wide receiver and played really well. Although Wright had a contract with the Buccaneers till 2015, he was traded to the New England Patriots.

Tim played as a wide receiver at Rutgers and his head coach was Greg Schiano who was furthermore his head coach in the NFL for his rookie season afterward. This American footballer's professional football career started on 29th April 2013 when he was signed by the Tampa Bay Buccaneers based in Tampa, Florida, as an undrafted free agent.

Tim signed a contract of $ 1.4 Million USD with Tampa Bay. While in Tampa, Tim played many games as a wide receiver before being moved to tight end on 12th July 2013. Tim’s NFL career as of 2013 shows that he scored 5 touchdowns, 54 receptions and that his receiving yards were 571 which was considered great for his age. As a rookie for Buccaneers Tim’s five touchdowns were and he also signed a contract with the Tampa Bay Buccaneers from 2013 to 2015.

On August 26, 2014, Tampa Bay Buccaneers traded Tim Wright to the New England Patriots based in the Greater Boston area and along with that was a 2015 4th round draft pick for Logan Mankins. Tim was given the no.81 as an active roster.

Tim Wright, also known to be a decent pa s s-catcher who can line up in the slot or split outside stands tall at the height of six feet four inches and weighs a hefty 100 kg or 229 lb. Currently, Tim is 24 years old and is doing exceptionally well for his age. Timothy is certainly a big boon to his team. Tim Wright has come to light only recently due to his transfer in New England Patriots, therefore, he is not fully recognized by the media. The media has not revealed if he is married or has a girlfriend.

Therefore the public is unaware of his personal life. Although one thing is clear to the public that Tim is earning a lot and his market value has definitely risen after his trade from Tampa Bay. Tim’s market value according to late 2013 is 2.9 million USD.

Similarly, his net worth was 1.5 million USD. His net worth after the trade to Patriots is yet to be known. The public and Timothy Wright’s team has full faith in him and are eager to see more of his performance after the recent New England Patriots preseason finale.

His wife name is Jodi-Ann Wright.