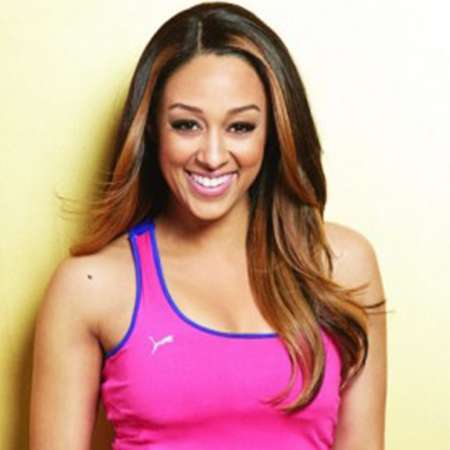 Tia Mowry has established herself as one of the prominent faces in the field of acting. An actress and producer is best known for her teen role on the ABC/WB sitcom Sister, Sister as Tia Landry. She also acted on the CW/BET a comedy-drama named The Game as a medical student Melanie Barnett Davis. For her breakout performance, the actress also won a number of prestigious accolades including Hall of Fame Award and Image Award.

Tia Mowry was born as Tamera Darvette Mowry on 1978 6th July in Gelnhausen, Hesse, West Germany. Mowry is the daughter of Darlene Renee Mowry and Timothy John Mowry. Her mother was a security guard while her father was in the US Army.

Mowry belongs to American nationality and regarding her ethnicity, she is from a mixed ethnical background as her father is of English ancestry and her mother is of Afro-Bahamian descent. She has a twin sister named Tamera Mowry who is two minutes older than her sister as Tamer was born at 4:30 pm and Tia was born at 4:32 pm.

Mowry has also two younger brothers named Tahj Mowry who is an actor and Tavior Mowry who plays football for University of California, Davis. She attended Birmingham High School in Van Nuys, California. She later went on to study at the Pepperdine University and majored in Psychology. Tia also went to Europe to study Italian and humanities too.

Mowry along with her twin sister started her career by entering into pageants and talent shows too. When they were 2 years old, the two convinced their mother to move to California with them to continue their acting career. And finally, they moved to California permanently in the year 1990 and began appearing in small roles and in commercials.

The actress is best known for her acting in Sister, Sister alongside Jackee Harry, Jackee Harry, and Tim Reid. After that, both twin sisters went to study psychology at Pepperdine University. She also made an appearance in The Hot Chick as cheerleaders. In 2000 Tia and her sister had co-starred a film Seventeen Again.

In 2005,  in Mowry featured in Disney Channel Original Movie Twitches and also in its sequel Twitches Too. In the next year 2006, Tia appeared in an episode of Strong Medicine which was her sister’s television show. She had also starred in a television series The Game. She was nominated for Teen Choice Awards for best actress in a comedy.

Tia and her sister Tamera are also singers. They also sang in the episode of Sister, You Can’t Hurry in Love, Amazing Grace, The Supremes and in I’m Going Down too. Tia also published a book in May 2012 named Oh, Baby: Pregnancy Tales and Advice from One Hot Mama to Another. The book is about her pregnancy. In 2013, Tia played the leading role in a comedy series Instant Mom alongside Sheryl Lee Ralph and Michael Boatman.

For her mind-blowing performance in both, movies and TV, Tia has won a  number of prestigious accolades especially her role in the series Sister, Sister. In 1999 and 2000, she won Image Award for Outstanding Actress in a Comedy Series. In 1995, she won Favorite Television Actress for Sister, Sister. In 1998, she also won Hall of Fame Award.

Tia Mowry has earned a decent amount of net worth from her acting career which according to the richest is about $8 Million and as per celebrity net worth is around $4 million.

Mowry was a cast in a 2002 teen comedy movie The Hot Chick which made a whopping box office collection as it grossed more than $54 million against its producing cost around $34 million.

Tia Mowry is a married woman who tied the knots with her boyfriend actor Cory Hardrict on 20 April 2008, in California. Tia met her husband Cory Hardrict during the filming of the movie Hollywood Horror.  Shortly after that, the couple started dating each other.

They dated for six years and after such long relationship both got engaged on Christmas 2007. They married on 20th April 2008 in California. Tia gave birth to her first baby boy on 28th June 2011 and named Cree Taylor Hardrict.

The two welcomed their second child, a daughter named Cairo Tiahna Hardrict, on May 5, 2018.