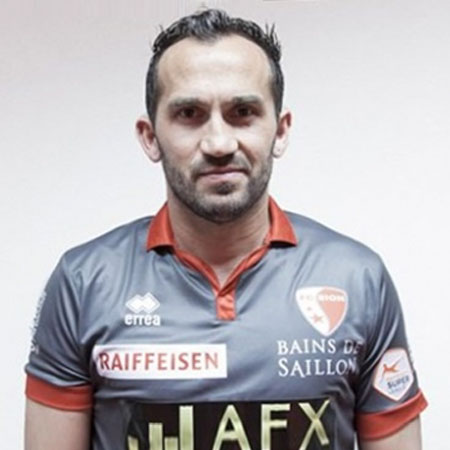 Theofanis “Fanis” Gekas is a Greek Forward who is at present playing for Konyaspor in the Super Lig and for in the Greece national team. He was born on 23 May 1980. Gekas was the top scorer in last season of the Greek League and Bundesliga as well the top goal scorer of 2010 FIFA World Cup qualification for the Europe section. He scored 10 goals for Greece.

Gekas began his career with the local club Larissa and was with the club for three years. After three years at Larissa he transferred to Kallithea in the summer of 2001 and was promoted to the Greek top division in his very first season there. In total of 87 second division matched he has scored 30 goals. Gekas played 73 matches for Kallithea and scored 32 goals. He was transferred to Panathinaikos in the winter break of 2005. At Panathinaikos he became the top goal scorer of the Greek League with a score of 18 goals in 2005.  In 41 appearances he amde for Panathinaikos he scored 23 goals. Gekas made his debut in the UEFA Champions Legaue. He got second in the list of Greek top goal scorers in the competition. Gekas was loaned to VFL Bochum for 300,000 Euros. The deal made to the German club VFL Bochum was that they had the option to permanantly have Gekas in the club at the end of the season for another additional 700,000 Euros if they stayed in the top division. Within a very short period at VFL Bochum Gekas became one of the stars of the club and a major popular one among fans. Gekas finished the season for VFL Bochum in the Bundesliga as the top scorer of the league with the record of 20 goals. He was transferred to Bayer o4 Leverkuksen at the end of April 2007. Gekas helped the team secure a quarter final palce in the UEFA Cup in 2008. For the remainder of 2008-2009 season, Gekas was loaned to Portsmouth by Leverkuksen. In Portsmouth he didnt get to play much matches, the only match he played for the team was on 11 April 2009 against West Bromwich Albion where he came on as a substitute for one minute. The match was a draw. He returned to Bayer Leverkusen after Portsmouth terminated his loan period two weeks earlier than expected on 21 May 2009. He had a hard time maintaining his place at Bayer Leverkusen, he left the club after one and half year. Bayer Leverkusen Loaned Gekas to Hertha BSC On 17 December 2009 signing a half-year contract. In the 17 appearances for the club he scored 6 goals. Gekas signed a two year contract with Eintracht Frankfurt on 19 May 2010. In the 34 appearances he made for the team, he scored 16 goals. He left the club in not so friendly terms. He was crticized for not willing to learn German after being in the country for 5 years which he replied to saying that he was paid to score goals not to speak German. He was signed by Samsunspor in Super Lig for six months on 7 January 2012. Although Gekas signed a two year contract with Levante UD in Spanish La Liga in August 2012, he left the club on 27 November the same year. He signed a one and half year contract with Turkish Super lig side Akhisar Belediyespor on 25 January 2013. Akhisar were struggling to get past relegation. Gekas played overall 15 games in the 2012-13 seasons where he scored 12 goals and eventually Akhisar avoided relaegation. On fifth September 2013, Gekas was signed for one and half year by Super Lig club Torku Konyaspor. He will be wearing No.22 Jersey while playing for his Current Team Konyaspor.

Apart from his club football career, gekas is also a part of Greece National team. On 9th September 2009 he announced his retirement from the national team, but one year later he came back to the team. Gekas has helped his nation reach UEFA Euro 2008.

He married Vasso Gekka in 2008. He and his spouse have two child together. Mikaela-Lamprini  Geka  and Nikolaos Gekas are their twin children. Gekas is a well built player with a height of 1.80 m and a weight of 71 kg.

His achievements include being Greek Super league top Goalscorer in 2004-05 season, Bundesliga top goal scorer in 2006-07 season and top Scorer in 2010 World Cup Qualifiers from the UEFA section. Gekas has an annual salary of 600,000 Euros and his market value is worth 800,000 Euros.