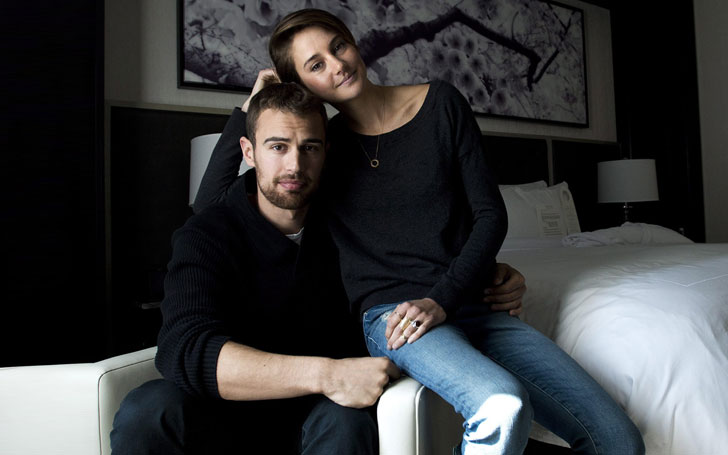 We have a love triangle here, well, sort of!  Theo James, Shailene Woodley, and Ruth Kearney seem to be in quite a weird romantic situation.

Theo James and Ruth Kearney started dating in 2009 and were said to be engaged in 2015. However, two years have passed, and there is no word about marriage. Something smells fishy!

We bring you the absolute truth about this relationship here!

It's Hollywood; heartbreaks exceed the number of movie releases. Is Ruth Kearney the one whose heart's been broken here? Is Shailene Woodley the homewrecker? Theo James and Ruth Kearney were well on their way to getting married. Even though none of these actors have come out and said anything, we have our theory!

Must Read: How are Shailene Woodley and Ansel Elgort related?

After the fans saw James and Woodley in the Divergent series, and they instantly started shipping these two together. Soon after, there was news that they do not just share the chemistry on-screen but off-screen as well.

It does not just stop to this, according to some sources this on-screen couple was seen very close to each other, they were holding hands, enjoying the desert, and even kissing passionately.

There's more to the fire, James and Woodley seem touching each other quite closely in photographs as well. But, that could be just PR for the movies, couldn't it?

So what does the fiance has to say about it? Is the co-star the reason for their wedding to get postponed? Are the rumors of their breakup true? Could very well be, but we won't know for sure until we hear anything from the involved parties.

Why Has the Wedding Postponed? Ruth Kearney says;

Ruth Kearney has made it clear that the wedding has not been postponed due to Woodley or any other issue but they do not want to rush into the relationship and end up like others.

Also, as a matter of fact, Kearney is busy with her Netflix series Flaked. There she plays the role of Claire/London. So, it seems like scheduling and busy lives are the reasons. Let's hope that is the case. Also, Woodley is too sweet and practical for a girl to be a homewrecker!

It seems like fans and the media wanted Theo James and Woodley to get together so bad, they invented stories to break up James' engagement. Now, that's just sad!

Post all the love triangle drama, all three stars have sorted out their problems. As per the recent reports, Ruth and Theo got married in an intimate ceremony. The couple tied the knot in August 2018. The two were photographed partying in Chianti, Italy, where Theo was spotted with a ring on his wedding finger, and Ruth was wearing a gorgeous white dress. The Hollywood power couple is sharing a loving relationship with each other.

On the other hand, Shailene moved on with her new boyfriend Ben Volavola. Ben Volavola rugby player who currently plays for the French Top 14 team Racing 92. The couple has been dating since 2017. The actress confirmed her relationship with her boyfriend, Ben, via her Instagram account where she shared a story of kissing each other.