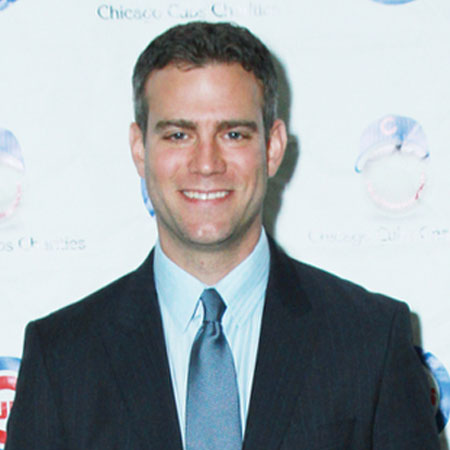 Theo Epstein is an American baseball attorney and executive, who is currently the President of Baseball Operations serving for the Chicago Cubs of Major League Baseball. He also became the youngest general manager in the history of MLB.

Theo Epstein was born on December 29, 1973, in New York city, whereas he was raised in Brookline, Massachusetts with his 60-second older twin brother Paul, who is a guidance counselor at a high school in Brookline, MA.

Theo Epstein's family members are filled with talents and have got many achievements. Theo's Grandfather won Academic Awards for the screenplay of Casablanca along with his great uncle Julius J. Epstein and Howard E. Koch.

During the time Theo's father Leslie Epstein, who is a novelist, later became the head of Creative Writing Program at Boston University.

Later Epstein joined Yale University and graduated with a degree in American studies in 1995. He worked as a Sports editor in Yale Daily News. During his college period, Theo wrote many letters to several teams regarding his interest in working with them. Luckily, One of his letters reached Baltimore Orioles team executive Calvin Hill, who is a head of personnel.

Epstein was called for an interview where he interned for 3 consecutive summers. After all, Theo was hired as an assistant for the Orioles. Later on, he moved to San Deigo Padres with Larry Lucchino as a director for player development, at the same time Theo, also studied at University of San Deigo School of Law and gained Juris Doctor degree by Lucchino's suggestion.  Later he was appointed as a general manager of Boston Red Sox on November 15, 2001.

Talking about his personal life Theo Epstein is married to his long-time girlfriend Marie Whitney on Jan 12, 2007. Since the couple is spending their life happily till now.

The couple is blessed with two children named Jack and Andrew. Epstein's wife is a founder and creative director of Two Penny Blue. Besides his married life, Theo Epstein may have been in love affairs before, but has always maintained privacy about it. Theo Epstein is an American and belongs to white ethnicity.

Theo has done some charity works also. His "Hot Stove Cool Music" are semi-annual Boston and Concert in Chicago have raised millions of dollars for the disadvantaged youth and families.

Looking at Theo's personality and their lifestyle, Theo Epstein earns a heavy amount of salary from his sports career which is estimated to be $ 25 million.