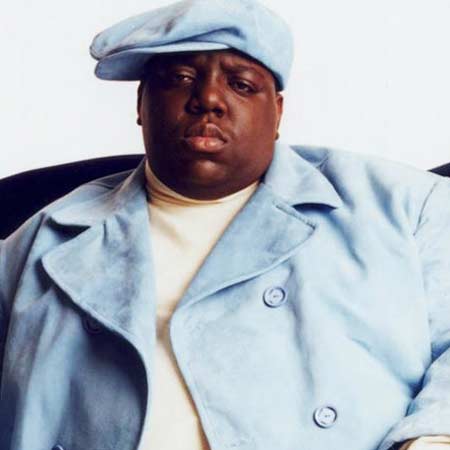 The Notorious B.I.G was the stage name of  Late Christopher George Latore Wallace, an American rapper also known as Biggie or Biggie Smalls. He was murdered in a drive-by shooting at the age of 24 on March 9, 1997, reasons being speculated as the feud between the east and west coast hip-hop rappers. Biggie was an artist known for his storytelling abilities and his semi-autobiographical lyrics which had a significant impact on the audience. He had smooth flow while singing and changed his pitch often. His album " Life after death" which was released 16 days after his death ranked No.1  in the US charts and even was certified Diamond in 2000 by the Recording Industry Association of America. This honor was very big since this album was one of the very few to receive this recognition. His other three albums were also released following his death and it managed to make sales of 17 million units in the United States including his albums alone making a sale of 13 million. He was listed in the Billboard's top 10 rappers of all times.

Biggie was one of the few artists to ever have collaborated with late pop sensation Michael Jackson. Biggie even has his biographical movie made named Notorious which shows all the events that occurred in his life.

Early Life Of The Notorious B.I.G

Wallace was born to Jamaican parents, Voletta Wallace and Selwyn George Latore on May 21, 1972. He was born in New York City in St. Mary's Hospital and was the only child of his parents. Wallace was brought up by this mom alone since his father, Selwyn abandoned the family. At the time he was a minor and was only 2. His mother raised him in Clinton Hill, on 226 St. James Place near the border of Bedford-Stuyvesant, Brooklyn and to provide a better life to Wallace had to work many jobs.  At the age of 10, he was given the nickname "big" due to his size.

From the tender age of 12, Biggie started selling drugs unknown to her busy working mother who found about it later when he was already an adult. On his request, he enrolled to George Westinghouse Career and Technical Education High School which was also attended by famous rappers Busta Rhymes, DMX, and Jay- Z. Wallace's mother Voletta often said he was a good student but came to develop some spoiled habits at the new school and even dropped out at age 17 only to involve in crimes later on.

In 1989, Biggie was sentenced to five years detention following weapon charges in Brooklyn.  The following year he was arrested for violating his probation. Then in 1991, Biggie was sent to prison for 9 months for dealing crack cocaine in North Carolina.

Biggie was just a teenager when he started rapping as he used to rap for people on the streets and even performed with local group likes The Old Gold Brothers and The Techniques. Biggie made a demo tape under the name of Biggie Smalls referencing a character in the 1975 movie Let's Do It Again which was related to his standing. It was made with no serious intent of cracking a recording deal but it was noticed by New York-based DJ Mister Cee and later on heard by the editor of The Source.

Biggie was featured in the Source's Unsigned Hype column which was dedicated to young rappers in 1992. He signed with Uptown Records A&R  upon his demo tape being liked by the record producer Sean Combs popularly known as Diddy, Puff, and Puff Diddy. He also appeared in the label mate, Heavy D & THE Boyz'  song A Buncha Niggas from the album, Blue Funk. After the signing of his recording contract, Sean Combs was fired from the label and Biggie followed him. Combs went on to start a new label and in mid-1992 he was signed to his new imprint label, Bad Boy Records.

Biggie went on to gain recognition from a remix he made to Mary J. Blige's single Real Love, under the pen name The Notorious B.I.G. He opted for this name since his former name Biggie Smalls was already in use.  His song Real Love ranked #7 on the Billboard Hot 100 chart. His success continued with remixes with Neneh Cherry and Reggae artist Super Cat's Dolly in 1993. The same year in April, his solo track Party and Bullshit featured in the 1993 comedy movie, Who's the Man. In 1994 he collaborated with LL Cool J and Busta Rhymes on a remix to label mate Craig Mack's  Flava in Ya Ear, which reached #9 on the Billboard Hot 100.

Biggie's album Ready to Die was released on September 13, 1994, peaked at #13 on the Billboard 200 chart and was certified platinum four times. The same year, he became friends with Tupac Shakur. Biggie's mentored group Junior M.A.F.I.A which included many rappers and his childhood friends had quite the success as their debut album Conspiracy went gold and its singles Player's Anthem and Get Money landed gold and platinum; both the tracks featured Biggie.

After 16 days of his death, Biggies' album Life after Death was released which made it to No. 1 in Billboard 200 charts and got certified as Diamond in 2000. It's lead single Hypnotize is the last song Biggie had been a part of in his journey as a musician. His other singles Mo Money Mo Problems and Mase both reached No. 1 in the Hot 100. Wallace had founded a hip-hop group named The Commission which included big names like Jay Z, Lil' Cease, Sean Combs, Charli Baltimore and Wallace himself.

Wallace even featured on Late Michael Jackson's 2001 album, Invincible. As time went by his vocals were even heard on some hits like Foolish, Realest Niggas and Runnin' Dying to Live. On May 19, 2017, a duet album titled The King and I was released which featured Biggie and his wife Evans. The album had two singles,  NYC featuring Jadakiss and When we Party which featured Snoop Dogg.

The Notorious B.I.G's Net Worth

Wallace or Biggie had a net worth of $20 million before his death. His estimation went up the hill over the 20 years after his death with his posthumous album releases, re-releases, licensing deal and so much more totaling to be a huge $160 million net worth. He had a lavish house and had multiple branded cars. He had an SUV which he used to ride which cost around $1 million. His house in Brooklyn was marketed to be $725000 and furthermore, his son Christopher Wallace is worth a whopping $50 million.

CAPTION: Biggie showcasing his sense of style. SOURCE: the source

Biggie had his own thing going on and people defined him and his style like an era. He used to dress up lavishly with designs made my big fashion names.

Biggie was a good friend of Tupac and he often hanged out at Tupac's house. The conflict started when the east and west coast hip-hop scenes rivalry started. Tupac was from the west based in Los Angeles and Biggie was from the east based in California. Tupac even accused Biggie and his record label Uptown Records' founder Sean Combs, Andre Harrell and Biggie of having knowledge about the robbery which concluded in Pac being shot five time and losing thousands worth jewelry. But Biggie denied it saying that at the time he was busy recording.

Their conflict remained steady as Tupac then joined, The Death Row Records longtime rival of Uptown Record.  The beef between the two continued and in June 1996, Pac released a diss track Hit 'Em Up in which he claims having sex with Biggies' wife Faith Evans. Biggie, however, did not respond to the track direction, but he referred about the claim in Jay-Z's track Brooklyn's Finest saying "If Faye (Faith Evans, his wife at the time) have twins, she'd probably have two 'Pacs. Get it? 2Pac's?

On September 7, 1996, 2 Pac Shakur was shot multiple times in a drive-by shooting and died 6 days later due to complications from the gunshot wounds. Tupac's death was linked to Biggie as they had some rivalries going on. Later on, Biggie was found not guilty as people addressed he didn't hate Tupac that much to make him want to kill him.

Biggie has a child named Tynna born on  August 8, 1993, with his longtime girlfriend. He had already split with his girlfriend before his daughter's birth. The following year after the birth of daughter Biggie married American singer and songwriter Faith Evans. His second child was born with wife Faith on October 29, 1996, named Christopher "C.J" Wallace, Jr. On March 8, 1997, Wallace traveled to Los Angeles for an award show Soul Train Music Awards where he presented an award to Toni Braxton singer and songwriter.

Later on, he went to the party hosted by Vibe magazine and Qwest Records which included late singer and model Aaliyah and Biggie's boss Sean Combs. The following day when Biggie left for his hotel, he was shot four times in his chest and died on the way to a nearby hospital. His death is still a mystery but many speculate it happened due to the rivalry between the east and west coast hip-hop scenes. His funeral took place on March 18.

The Notorious B.I.G's Awards And Honors

In 1995, Wallace won artist of the year in Billboard Awards and his song "One More Chance" won Rap Single of the year. He has been nominated for the Grammys' in 1996 and 1998 for rap solo performance and best rap album. His lead single  Hypnotize from the album  Life after Death won best rap video in 1997 in the MTV video music awards. His album Life After Death won best R&B soul album in Soul Train music awards.  In 1998 his album Life After Death and it's first two singles received nominations in the rap category.

Here are 10 facts about The Notorious B.I.G