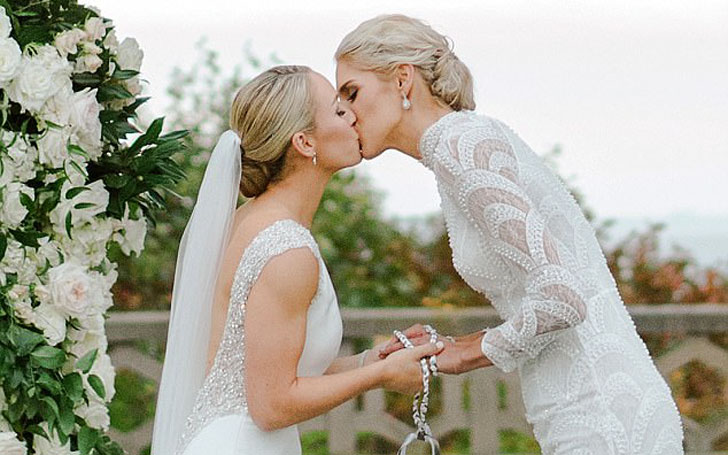 WNBA diva Elena Delle Donne has achieved a lot from her amazing basketball career after being selected second overall in the 2013 WNBA Draft by the Chicago Sky.

The gorgeous lady married her longtime love Amanda Clifton in a lavish ceremony in November 2017. Know details about the couple and their relationship.

The couple exchanged vows on Friday afternoon in front of friends and family members on Friday, 3rd November 2017 at the Hempstead House in Sands Point, New York.

After the grand event, the couple donated all the flowers to the Margaret Tietz Nursing and Rehabilitation Center in Queens.

In addition, the wedding cake standing at 6'5" tall was another jaw-dropping moment during the lavish ceremony. The duo dated one another for four years before getting engaged in August 2016.

A beautiful couple celebrating honeymoon at a beautiful place

It's pretty awesome to see another LGBT couple living a happy family life openly. Definitely, a great inspiration for youngsters!

Amanda remembers the exact moment she fell for the beauty. She explained,

I knew I fell in love when there was a weekend I was supposed to be going home to see my family and I literally could not get myself to leave [Elena’s] house. I kept stalling and making up reasons to wait a little bit longer before I left. I had never felt that feeling of not wanting to leave someone so badly!

Amanda and Elena both are lucky to have each other in their lives. Let's congratulate the happy couple and wish them all the very best in their life ahead.

Delle was also named a WBCA All-American. In 2007, she took part in the WBCA High School All-American Game scoring 17 points.

Elena Delle, the Winner of the Honda Sports Award in 2013

Following the amazing performances, she became the most highly touted women's basketball recruit since Candace Parker. Also, she received a basketball scholarship from the University of Connecticut.

Donne was selected second overall in the 2013 WNBA Draft by the Chicago Sky. She grabbed the 2013 Rookie of the Year Award.

She was named the WNBA MVP for the 2015 season as she scored a league-high 23.4 points for the same season.

In addition, she played in two NBA All-Star Celebrity Games, in 2014 and 2016. As part of the U.S. team, she got to play the 2014 World Championship. Also gave her best at the 2016 Summer Olympics in Rio de Janerio, Brazil. She became the sixth gold medalist from Delaware.